Free agency is now less than a week away and teams are looking ahead to when it opens up.  There will be several prominent players set to hit the open market in mid-July while many teams have key restricted free agents to re-sign as well.  Next up is a look at the Carolina Hurricanes.

F Martin Necas –Just one year ago, Necas looked like he would soon become one of the Hurricanes’ most important forwards. While that still might get there, his 2021-22 season was a step back. After scoring at a 63-point pace last season, many were expecting Necas to fulfill the promise that got him drafted twelfth-overall at the 2017 draft and become a true top-six forward. But for a variety of reasons, that didn’t happen in 2021-22, and Necas had a fine season, with 40 points in 72 games, but certainly not the clear-cut step forward many were expecting. The emergence of Seth Jarvis cut into Necas’ offensive opportunities, and Necas’ inconsistent nightly effort left many fans frustrated. TSN’s Pierre LeBrun reported that the Hurricanes may be tempted to trade Necas if they can get an offer for a young defenseman in return, although he also reported that the team is not actively looking to trade him, As a restricted free agent, Necas is likely in bridge deal territory and could get a deal around $3MM-$4MM, if not a bit more. While the Hurricanes did pull the trigger on a long-term extension for Jesperi Kotkaniemi before he had even finished his first season with the team, it doesn’t seem like they’ll go the same route with Necas. 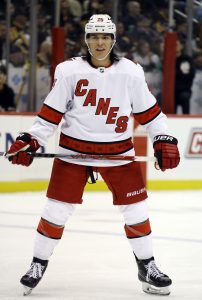 D Ethan Bear – Bear is in a similar situation to Necas. We previously covered how Bear has been given permission from the Hurricanes to speak to other teams about other opportunities, and he too could be on the move this offseason, even though the Hurricanes want to re-sign him. Bear, 25, has seen his usage decline since he averaged nearly 22 minutes of ice time per night as a rookie with the Edmonton Oilers, and he was a healthy scratch for the entirety of the Hurricanes’ run to the second round of the playoffs this year. Bear wants to play, as any player does, and now has the opportunity to look for a team more willing to give him a consistent nightly role. A short-term bridge around his current $2MM cap hit, with maybe a small raise, makes the most sense here.

F Vincent Trocheck – In April, we focused on Trocheck’s upcoming free agency situation in more depth. Not much has changed since then, though his productive playoff run (10 points in 14 games) should help his previously thin playoff resume. Trocheck is an established two-way pivot who is generally regarded as a solid second-line center. He can typically be relied on to produce around 50 points of offense, with the potential to hit even higher numbers in the right circumstances, as he did in 2020-21 with 43 points in 47 games and in 2017-18 when he had a career-high 75 points. Trocheck ranked third among Hurricanes forwards in shorthanded average time-on-ice per game with 1:46 and helped the Hurricanes to a top-ranked penalty kill finish in 2021-22 with an 88% success rate and a third-place finish in 2020-21 with an 85.2% success rate. Trocheck is also elite at the dot, and he won 54.6% of his faceoffs this past season. Trocheck’s defensive game earned him a third-place Selke Trophy vote, and he’s the sort of productive center who plays a 200-foot game that NHL GM’s are tripping over each other to acquire. Trocheck could earn a major contract this summer, with the potential to earn a similar deal to the seven-year, $7.14MM AAV deal Kevin Hayes got from the Philadelphia Flyers if there is a particularly interested suitor.

F Nino Niederreiter – In June, we took a look at Nino Niederreiter’s upcoming free agency in more depth. Niederreiter, 29, is a productive winger who can score around 20 goals and 50 points in most years, although he has had some less productive seasons. Niederreiter is a winger who belongs on an offensive line and can help support other skilled players in making and finishing plays. He’s not going to drive his own line or overwhelm anyone with his speed, skills, or physicality, but he’s the sort of productive offensive winger that can reliably staff any second line in the NHL. it’s unlikely that Niederreiter gets a raise from the $5.25MM he earned this season, and it’s actually far more likely that his next contract comes in below that number when you consider the flat-cap world NHL clubs are operating in. 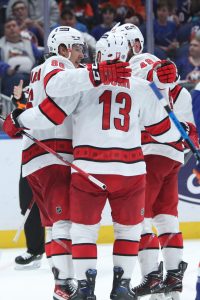 F Max Domi – Domi has been a bit of an enigma so far in his NHL career, as he’s had years where he’s a highly productive fan-favorite top-six staple, and he’s also had seasons where he’s underperformed, butted heads with coaches, and struggled to make a positive impact on the ice. The true reality of Domi’s game and the value he brings to an NHL team likely lies somewhere in the middle, and his time in Carolina provides a blueprint of what teams can reasonably expect from Domi moving forward. The 27-year-old scored seven points in 19 regular-season games and six points in 14 playoff games, and became the Hurricanes’ Game Seven hero with two important goals in the team’s victory over the Boston Bruins. Domi brings real energy and offensive skill to a lineup, but he struggles to read the ice and effectively utilize his teammates. So while his offensive talent is undeniable (his 72 points on an otherwise offensively mediocre Montreal Canadiens team is proof of that) his vision is the largest factor that keeps him from being a consistent top-six force. If a team is reasonable with its expectations, they could get a solid middle-six scoring winger at a price that’s not likely going to be exorbitant.

As one would expect for a team with multiple established NHL-ers whose contracts have expired, the Hurricanes are not without room to maneuver under the salary cap this summer. CapFriendly projects them to have over $19MM in space to work with, although that projection is with defenseman Jake Gardiner still placed on long-term injured reserve. Gardiner is now healthy, ineligible for LTIR, and ready to play. If Carolina was the absolute most possible cap space to work with for Wednesday, they’ll have to move Gardiner and his $4.05MM cap hit.