As things stand, the NHL is planning to have games resume at some point over the coming weeks.  Assuming the regular season continues, there will be plenty of things to watch for over the stretch run.  Over the weeks ahead, PHR will examine the top stretch run storylines for each team.  We continue our look at the Pacific Division with Edmonton.

No one was quite sure what to make of the Edmonton Oilers coming into the 2019-20 season. Back in 2016-17, the team made a promising playoff run, suggested that Connor McDavid was set to take Edmonton to years of deep playoff runs. Instead, the team collapsed for two straight years, being bounced from the playoffs both years and struggling with a weak defense and a lack of top-six talent. Add a new general manager in Ken Holland and the team under new head coach Dave Tippett is back in the playoff race, beginning to look like that 2016-17 team. 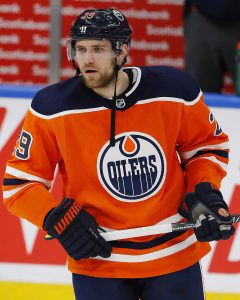 McDavid may be the face of the franchise, but Leon Draisaitl has been grabbing many of the game-to-game headlines as the German center has finally moved from McDavid’s wing to center his own line and has found success. He has formed his own line with Ryan Nugent-Hopkins and Kailer Yamamoto, which has had great success throughout much of the second half of the season. The 24-year-old who had 50 goals and 105 points a year ago, has already surpassed that point total in less games. He has 43 goals and 110 points through 71 games and is leading the league in scoring.

Could Draisaitl be joining McDavid as a Hart Trophy winner? He is 13 points ahead of McDavid who is second in the league in scoring. With the turnaround success of the Oilers, who are in second place in the Pacific Division, Draisaitl may just be the lead candidate for the trophy.

The Edmonton Oilers picked up three players at the trade deadline in a hope to bolster their defense and their offense to another level. The team gave up two second-round picks in order to pick up the speedy Andreas Athanasiou, while also moving a future fifth-rounder for winger Tyler Ennis. They also moved Kyle Brodziak and a fourth-round pick to Detroit for veteran defender Mike Green.

However, the Oilers have yet to get much of a return on those investments as Athanasiou has appeared in just nine games with just one goal. Ennis has fared better with two goals and four points in nine games. Green has appeared in just two games due to injuries. The hope is all three can make significant strides when/if play resumes. However, if the season is cancelled, the Oilers will only have Athanasiou left as the other two will be unrestricted free agents and no guarantees that they will return next season.

With so few games under their belt, the learning curve for all three players could be significant as they have to learn a new coaching system and how to play with new linemates.

Loss Of A Teammate

With all the tragedy stemming from the COVID-19, the Oilers suffered a separate loss when forward Colby Cave passed away on Apr. 11 when he was placed into a medically-induced coma due to a brain bleed. The forward had appeared in 44 games with the Oilers over the past two years and he played in 11 games this year with Edmonton.

While he wasn’t a full-time player with the Oilers, he was a big part of the team and the Oilers will have to deal with that loss as a team. How the team handles it could have a big effect on how the team performs in the playoffs when/if the league gets the season re-started.