Key Restricted Free Agent: D MacKenzie Weegar – The Florida Panthers have brought the 25-year-old blueliner slowly and he’s starting to provide some value as bottom-tier defenseman. Weegar almost doubled his offensive output, putting up four goals and 15 points last season, while seeing his ATOI increase by more than two minutes to 16:58. Injuries kept him out of 18 games, but Weegar is slowly developing into a reliable player the team needs as defense remains one of the team’s biggest weakpoints. His minus-three rating isn’t too bad, but could be improved upon. 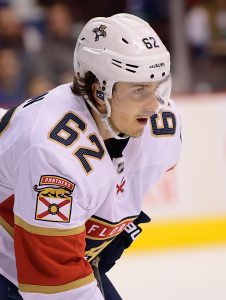 F Denis Malgin – The team has gotten some output out of the 22-year-old Malgin, but the forward has failed to play more than 51 games in any of his three seasons so far with the Panthers as he has dealt with numerous injuries. Regardless, Malgin has showed some potential to put up some points, although he is never likely to be more than a third-line option at best for the Panthers. He tallied seven goals and 16 points, a little less than the 11 goals and 22 points he put up in 2017-18. While he’s shown to be a serviceable depth option for Florida, he likely will never be a 20-goal scorer.

G – Sam Montembeault – With a need for a starting goaltender and the fact that Florida traded James Reimer earlier this morning, the team doesn’t even have a legitimate backup on the roster. The 22-year-old Montembeault did get some NHL playing time this season and might be ready for a permanent back-up role. He played 11 games for the Panthers last season, posting a 3.04 GAA and a .894 save percentage. His numbers weren’t much better in Springfield, suggesting that he probably needs more seasoning, but the youngster is likely the heir apparent to the backup sometime in the future.

Key Unrestricted Free Agents: F Riley Sheahan – A former first-round pick with the ability to play center, the 27-year-old has now found himself with three teams already and it could be a fourth. Sheahan was acquired in February as part of the deal that saw Florida trade off Jared McCann and Nick Bjugstad, but didn’t do much to impress with the Panthers. He scored just two goals in 33 games for Florida and finished the season with nine goals and 19 points. However, the main reason that the Panthers took on Sheahan was that his contract was expiring, which the team wanted in hopes of bringing in a big-game free-agent.

Projected Cap Space: The Panthers currently sit a little more than $25.23MM under the cap ceiling, according to CapFriendly, which should give them plenty of maneuvering room to sign multiple big-name free agents. The team is well-known for being interested in signing both of Columbus’ top free agents in Artemi Panarin and Sergei Bobrovsky and, if the team can convince both to sign, they have ample cap room to lock up both to long-term deals. If they can only sign one, that still leaves them with Plan B options as well, although their top priority is to add a goaltender, their most desperate need.