The team has just three entry-level players and all three will be critical to the team over the next couple of years. Their 2016 first-rounder, Kunin, suffered an ACL injury in April that required surgery. While he is close to be ready to return, he’s still being held out to allow his knee to fully heal. Regardless, the team has high expectations for him. He struggled to capture a full-time role with Minnesota last year, but scored 10 goals in the AHL in just 36 appearances there, while getting 19 games in with the NHL club. The team will need him to step into a full-time role as soon as he’s healthy. Eriksson Ek, the team’s 2015 first-rounder, got himself a full-time role, but struggled to put up points in the bottom-six, posting six goals in 75 games. A bigger role could allow him to take that next step.

The team also has big hopes for Greenway, who the team pried away from Boston University this spring. The 6-foot-6, 226-pound winger should provide the team with a solid power forward, who could jump into the team’s top-six immediately. 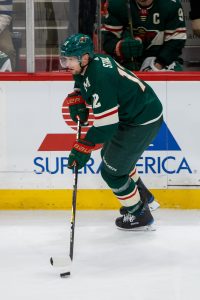 The team will have an interesting decision to make on Staal at the end of this season. Staal, who was coming off a disappointing 13-goal season a few years ago, signed a three-year, $10.5MM deal, which has been one of the team’s best signings in their history. Staal, who many thought might be slowing down, responded with 28 goals in 2016-17 and followed that up with a 42-goal season last year. Now at age 33, what will Minnesota do in a year when he’s 34 and in need of another deal? If he posts another impressive season, the Wild will have to pay up to keep his services. A disappointing year could mean the end of a thrilling ride.

The rest of the group are full of one-year deals in which the players must prove their worth. The team brought in Fehr, Hendricks and Read to shore up their fourth line, which struggled at times last year, while the team also has a pair of veteran netminders fighting for the backup goalie spot in Stalock and Hammond.

The team gave Koivu a two-year extension a year ago, but the 35-year-old is starting to fade after a 14-goal, 31-point performance last season and could be moved down a line, especially if Eriksson Ek continues to improve. Koivu still remains the all-time leader in both games played and points, however, but this could very likely be his last contract.

Granlund could also be an interesting situation. The 26-year-old has improved his game over the last two season, posting a combined 47 goals and he had a career-high in assists last year with 46. His second half was also a big success as he posted 45 points in 46 games, almost a point a game. If he can keep that production up, the Wild should look good. Fortunately, the team has two more years to monitor his success before they have to offer him a new contract. Coyle is another player, who has the ability to put up big points, yet Coyle has struggled more recently, posting just 11 goals and 37 points in 66 games. However, a broken fibula could have been a cause of his on-ice struggles. The team hopes that he can bounce back and prove he belongs in the team’s top-six.

Spurgeon has been perhaps the team’s best defenseman this season. The 28-year-old missed 21 games with a partially torn hamstring and rushed back for the playoffs, but wasn’t 100 percent. Already injury-prone, the team still has the veteran for another couple of years before they have to decide on another long-term contract.

Dubnyk has been solid for the team even though plenty have their doubts about the goalie. Regardless, he has played 60 or more games for three straight years and hasn’t had a save percentage lower than .918 in any of those year. The 32-year-old is locked up for three years, so the team will have to look into a long-term replacement soon as the years will eventually add up on Dubnyk. While his 2.52 GAA last year was the worst in several years, the veteran still posted 35 wins.

Brodin will likely end up playing alongside Spurgeon this season and should be able to complement them well. He adds a highly-regarded defensive presence to the team’s top-four. Both Pateryn and Seeler could conceivably fill out the team’s third pairing. Pateryn may be one of the team’s more underrated signings this offseason, while Seeler impressed with his toughness and mobility in a 22-game limited viewing at the end of the year.

Foligno struggled early on last year after coming over from Buffalo, but started to figure out the Wild’s system by the end of the year and was impressive in the playoffs. If he continues on that same course, he should provide the team’s fourth line with some much-needed hard-hitting.

The team’s toughest contracts are the ones that will be held over the team for another seven seasons, but it’s Parise’s deal that will prove truly costly. The Wild signed both Suter and Parise to matching 13-year, $98MM contracts back in 2012. While Suter is still providing solid value (albeit his recent injury), Parise has struggled with injuries. The 34-year-old sat out most of the first half due to back surgery, the veteran came back and performed quite well during a 16-game stretch when he scored 12 goals. However, a broken sternum at the end of the year, knocked him out of the playoffs. The team hopes he can bounce back this year, while Suter also suffered a broken fibula which could have ended his career. However, he has fought back from that injury and is expected to be ready for the start of the season. Suter had 51-point season before going down with his injury.

The team locked up both Dumba and Zucker in the offseason as they both received five-year deals. Dumba provides offense as he’s scored double-digit goals in three straight seasons and could find himself playing next to Suter this year if coach Bruce Boudreau gets what he wants. The 24-year-old had a breakout season as he posted a career-high 50 points. Zucker was handed a two-year “prove it” bridge deal two years ago and he responded with a  combined 55 goals, and was rewarded for that with a five-year, $27.5MM contract and will stay on the team’s top line.

The big unknown is Niederreiter, who had three straight 20-goal seasons, but struggled with injuries all season. If he can bounce back, his contract may not look too bad, but the team had high hopes he might take that next step and develop into a 30-goal scorer, which he has so far failed to do. The team really needs Niederreiter to show that he is as good as his contract if the Wild want to return to the playoffs for a seventh straight year.

The Wild have a new general manager in Paul Fenton, but so far there has been little change. Whether he’s waiting to see if some of his players have bounce-back seasons before shipping some of them off or whether the team has too much money invested in its veterans, the team is at a crossroads. If players like Coyle, Niederreiter, Parise and Granlund can return to form, the team may be able to take that next step in the playoffs. However, the team just as easily could go the other way and start a rebuilding project around players like Zucker, Dumba and Greenway and do a proper rebuild. This will be the year that will determine which direction the team intends to go.