Free agency is now a little less than a month away from opening up and there are quite a few prominent players set to hit the open market while many teams have key restricted free agents to re-sign.  Here is a breakdown of St. Louis’ free agent situation.

Key Restricted Free Agents: F Robby Fabbri – Things haven’t gone smoothly for Fabbri over the past few years, as he’s faced multiple injuries that have robbed him of all but 51 games since the end of the 2015-16 season. After scoring 18 goals and 37 points as a rookie, and starting his sophomore season on an even better pace, the Blues had big plans for their 2014 first-round pick. 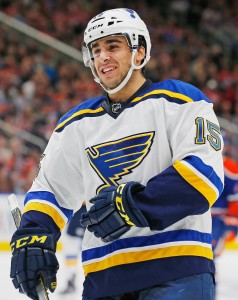 Now, after two straight major knee surgeries and more than a year away from NHL action, it’s not clear where he sits in their future. It was obvious that if he was healthy he could help the team offensively, but negotiations this summer are not leaning in his favor. A short-term deal seems likely for a player that is both an injury risk and hopes to prove himself again in 2018-19.

D Joel Edmundson – The 2011 second-round pick has turned into quite the player for the Blues, and found himself logging more than 20 minutes a night this season while they dealt with injuries to Jay Bouwmeester and inconsistent play from Carl Gunnarsson and Robert Bortuzzo. The Blues have young Vince Dunn expected to make an even bigger contribution next season, but Edmundson could take another step forward as he enters his mid-twenties.

The 24-year old defenseman is coming off a two-year $2.1MM contract, and should earn more than that in just a single year on his next deal. If St. Louis believes he can be a core piece of their blue line for the coming years, there could be a long-term deal in order. He’ll turn 25 before July 1st, meaning a two-year contract takes him to unrestricted free agency in the summer of 2020.

Key Unrestricted Free Agent: G Carter Hutton – The Blues moved out their most intriguing free agent at the deadline when they traded Paul Stastny to Winnipeg, but Hutton could prove to have an even bigger market. The 32-year old goaltender led the league with a .931 save percentage this season among netminders with at least 20 starts, and could be looking for an opportunity to play an even bigger role with a team.

Jake Allen didn’t do much this season to prove that he can handle a full-time starter workload, meaning the Blues will likely make every effort to re-sign Hutton this summer. For a player who has never earned more than $1.13MM in a single season though, you can bet he’s intrigued by the opportunity free agency presents.

Projected Cap Space: The Blues, like many teams this summer have plenty of room to work with under the cap. With Stastny and others coming off the books they’ll have somewhere around $18MM in cap space depending on where the upper limit lands and could be big players in the market.

The team has recently admitted that they’re on the lookout for an upgrade at center, and many have speculated that they could enter the John Tavares sweepstakes should the superstar center reach unrestricted free agency. With plenty of young talent coming through the system on cheap contracts, landing a big fish like Tavares is a reasonable target for GM Doug Armstrong to aim at—whether he’ll get there is a different story.