New York Rangers prospect Vitaly Kravtsov has been demoted to the VHL by the KHL’s Chelyabinsk Traktor, their minor league affiliate, the team announced (Twitter link, translation required). Kravtsov has struggled significantly this season as he started the season with the Rangers with many expecting him to win a roster spot out of training camp.

Instead, he was sent to the Hartford Wolf Pack in the AHL where he had just one assist in five games and struggled to gain playing time. He opted to enact his European Assignment Clause and returned to Chelyabinsk Traktor team in the KHL with which he played 50 games last season as a 18-year-old. However, Kravtsov has struggled there as well, scoring just two goals in 11 games.

Sport-Express’ Igor Eronko reports that Traktor isn’t actively trying to trade Kravtsov’s rights, but they are willing to listen to offers for the 19-year-old.

Even after winning the Stanley Cup, many expected that the St. Louis Blues would be active on the trade market this summer. The team seemingly lacked the salary cap space to re-sign a vast number of restricted free agents, including goaltender Jordan Binnington, defenseman Joel Edmundson, and forwards Oskar Sundqvist, Ivan Barbashev, Zach Sanford, and Robby Fabbri. Somehow, GM Doug Armstrong did manage to get all of his young RFA’s back under contract, although it took time and left the Blues with very little cap flexibility heading into the new season. Unsurprisingly, that meant that trade rumors persisted throughout the off-season.

A quick look at the defending champs’ roster reveals that there is really only one obvious piece that St. Louis could be expected to try to move on from: starting goaltender turned overpriced backup Jake Allen. Allen’s name popped up throughout the summer and he tells Jim Thomas of the St. Louis Post-Dispatch that he was well aware of the rumors. However, he also informed Thomas that he knew better than to get caught up in the hype. Allen states that Armstrong and company assured him that he would not be traded this past summer:

I knew internally all along this summer that I wasn’t getting dealt. They had told me that. You know, people talk and things like that, but I knew that they don’t want to get rid of me, so it was good to be reassured that way. I knew that I was coming back. So just put my mind at ease and get really focused on being the best Blue I can. There was a lot of chatter obviously with the way the summer went and the run that Binner went on. But internally I knew I was coming back, so I wasn’t worried about it at all.

The language used by Allen paints a pretty clear picture of where his head is at entering the 2019-20 campaign. The 29-year-old is confident that the Blues want him in the mix and calls the play of 26-year-old rookie Binnington “a run”. In reality, Binnington greatly outperformed Allen in the second half of the year and earned the lion’s share of starts. He finished the season with a GAA nearly one whole goal better than Allen and save percentage more than 20 points better. It wasn’t close between the two and was actually the second poor season in a row for Allen. Yet, he still believes that this is an open competition and the contract figures may support his claim.

If the Blues did in fact promise not to trade Allen – albeit a handshake agreement as he has no trade protection in his contract – it does stand to reason that they see the next two years as an open competition to see which keeper, if either, is deserving of an extension. Even after his Calder Trophy finalist-caliber year, Binnington only received a two-year, $8.7MM contract. Both his and Allen’s contracts will expire following the 2020-21 season and in the meantime, Allen will still be making $50K more as the supposed backup. The scenario provides hope for the veteran netminder and that’s all he needs to get excited for the challenge of a new season: “There’s one net out there, and I’m gonna go after it. No question.”

The St. Louis Blues won’t have to go through a messy arbitration hearing with Zach Sanford, instead re-signing the restricted free agent to a two-year deal. The contract will pay Sanford an average of $1.5MM. 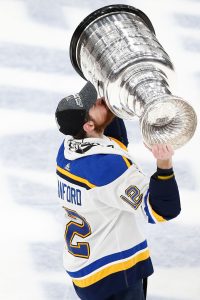 Sanford, 24, came to the Blues several years ago in the deal that saw Kevin Shattenkirk join the Washington Capitals, but only really made an impact this season. Playing in 60 games during the regular season the 6’4″ power forward registered 20 points, and ended up making quite the impression during the Stanley Cup Final. Scoring four points in five games against the Boston Bruins including a goal in the deciding game seven, Sanford’s future looks bright as a bottom-six contributor.

In fact, Sanford’s presence may be exactly why the Blues don’t have a ton of interest in bringing back Pat Maroon on a new deal. Sanford can likely fill the same role as a big-bodied forward with some scoring upside, and is considerably younger. A $1.5MM cap hit doesn’t represent a very lucrative deal, but does give the young forward some sense of security in his NHL role moving forward. Sanford will actually be a restricted free agent when the deal ends.

The Blues now have just three restricted free agents scheduled for arbitration in Jordan Binnington, Joel Edmundson and Oskar Sundqvist. Those three may also end up signing deals before their respective hearings, something that happens with the vast majority of players who file for arbitration. Ivan Barbashev and Robby Fabbri, the team’s other two NHL RFAs, were not eligible to file this year.

The St. Louis Blues are down 2-1 in the Stanley Cup Final after a thorough drubbing in game three, and will now make some changes to their lineup. Based on the morning skate, the team is expected to welcome back Oskar Sundqvist after serving his one-game suspension while Vince Dunn is also expected to return to the lineup and re-take his spot on the second powerplay unit. Robby Fabbri and Robert Bortuzzo are the expected scratches, while Zach Sanford will move up to the second line beside Ryan O’Reilly and David Perron.

The Blues need to try something after letting game three get out of hand in a 7-2 loss at the hands of the Boston Bruins. The team has never won the Stanley Cup in their history and it has been nearly 50 years since they were even in the finals. They’ll have to find a way to take game four at home or face a nearly insurmountable task for the rest of the series.

Getting Dunn back is a substantial addition however. The 22-year old defenseman has become a dominant force for the team, posting seven points in 16 playoff games while continuing to post impressive possession numbers. Though he isn’t used as much as some of the Blues other more experienced defenders, he provides some punch from the third pairing that Bortuzzo cannot. That kind of offensive upside may be crucial as the team tries to topple Tuukka Rask, who still easily leads the playoffs with a .939 save percentage and is a front runner for the Conn Smythe trophy.

The St. Louis Blues have made several roster moves as they prepare for their final game before the All-Star break. Zach Sanford and Tyler Bozak have both been activated from injured reserve, while Jordan Kyrou and Jordan Nolan have been sent back to the minor leagues. Sanford and Bozak had been dealing with concussions.

St. Louis will take on the Anaheim Ducks tonight in a game that actually could have some playoff implications. The Blues have played better of late under head coach Craig Berube, and now sit just five points behind the Dallas Stars and Colorado Avalanche for the wild card spots in the Western Conference. Unfortunately for the Blues there are four teams between them and those spots, one of which being the Ducks. They’ll need to win an awful lot of games like this down the stretch if they want to make a run for the postseason.

To do that they’ll need Bozak to play a bigger role than he did in the first half. Signed to a three-year $15MM contract in the offseason, the 32-year old center was handed a hefty amount of responsibility and minutes through the early part of the year. Unfortunately he has just 18 points through 39 games, not quite the level the Blues were hoping to get from the long-time Toronto Maple Leafs forward. Still, Bozak is as reliable as they come in the faceoff dot and could be a big part of a second half turnaround by St. Louis if they start getting reasonable goaltending and can get some sustained health.

The Chicago Blackhawks got a positive piece of news Saturday when injured goaltender Corey Crawford was out on the ice before practice since suffering another concussion on Dec. 16, according to NBC Sports’ Charlie Roumeliotis. The veteran goaltender worked with goaltending coach Jimmy Waite along with both Collin Delia and Cam Ward. However, despite the first sign that Crawford is working his way back, Chicago head coach Jeremy Colliton said it doesn’t mean much yet.

“Positive that he was out there, but I’m not sure it means a ton,” Colliton said. “Hopefully he continues to feel better.”

There are still a number of hurdles for Crawford to pass before there is even talk of a return. Regardless, it’s a positive development and considering it took Crawford nearly six months to return to action after his previous concussion, the fact that it’s only been a month is a good sign.

The Minnesota Wild and Toronto Maple Leafs kick off a busy NHL schedule today with an afternoon game which will see Michael Hutchinson suit up with his new organization, while the Los Angeles Kings will face the Tampa Bay Lightning in a David vs Goliath matchup to wrap things up. Six other games will be played around the league, and as teams prepare we’ll be right here keeping track of all the minor movement.

The Boston Bruins versus the Montreal Canadiens in the middle of December. You can’t get much more classic than that when it comes to the NHL, making tonight some must-see television for hockey fans. The two clubs will take part in one of five games scheduled this evening, before the week really kicks off tomorrow night. As always, we’ll be here keeping track of all the minor moves.

As always, Saturday features a busy slate on the NHL schedule with 20 teams in action.  As a result, there is bound to be plenty of roster movement throughout the day.  We’ll keep track of those moves here.

This offseason could be a very interesting one assuming that teams don’t lock all the potential unrestricted free agents to contract extensions in the coming months. The Athletic’s Craig Custance (subscription required) breaks down the top 25 UFA’s this coming offseason with an update on how contract negotiations are going.

One interesting note is for the No. 3 UFA in Columbus Blue Jackets’ Sergei Bobrovsky, who is rumored to be asking for Carey Price money (around $10.5MM). That might be too much money for Columbus to offer, especially for a 30-year-old goaltender. Custance adds that the team could easily get outbid for the netminder’s services by the New York Islanders who might be extremely aggressive in adding a franchise-changing goaltender. Islanders’ general manager Lou Lamoriello is known to be a big fan of impact goaltenders, which goes all the way back to Martin Brodeur when he was in New Jersey.

After all, in 315 games between Philadelphia and Columbus, Bobrovsky has a .922 save percentage, two Vezina Trophies and has finished in the top 10 in Vezina voting four times.