The Ducks have seen some of their walking wounded return in recent days (including winger Ondrej Kase tonight) and it appears that they’re getting closer to getting a couple of key centers back.  GM Bob Murray told Mike Coppinger of the LA Times that they believe that Ryan Getzlaf and Ryan Kesler will be ready to return by the time Anaheim’s next road trip starts (which is December 14th).  Getzlaf got off to a strong start to the season with seven points in seven games before suffering a facial injury that required surgery.  Meanwhile, Kesler has yet to play in 2017-18 after undergoing hip surgery in June.

That’s not the only good news on the injury front either as Coppinger adds that the Ducks are also expected to welcome back winger Rickard Rakell on Tuesday night.  If that happens, he’ll wind up missing four games with his upper-body issue.  It wasn’t long ago that Anaheim was lacking for offensive threats but within the next couple of weeks, that should change considerably.

Elsewhere in the Western Conference:

Jets prospect Pavel Kraskovsky told Daria Tuboltseva of Championat (link in Russian) that he has pushed talks of a possible contract extension with Lokomotiv Yaroslavl of the KHL until the offseason and that he would be open to signing with Winnipeg.  Kraskovsky was a fourth-round pick of the Jets (164th overall) back in 2014 and has played in all 35 games this season, recording two goals and four assists.  Even if he doesn’t sign an NHL contract, Winnipeg will still retain his rights indefinitely since there is no current player transfer agreement between the NHL and the KHL.

Elsewhere in the Western Conference:

The Los Angeles Kings have acquired forward Torrey Mitchell from the Montreal Canadiens in exchange for a conditional 2018 fifth-round draft pick. Should the Kings make the playoffs this season—they currently lead the Pacific Division—the draft pick would turn into the fourth-round selection that Montreal traded them last year in the Dwight King deadline deal. 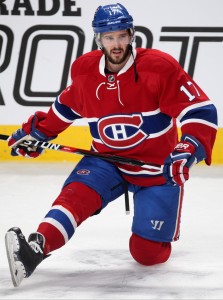 Mitchell, 32, didn’t have much of a role on the Canadiens this season and had been held scoreless through 11 games. While this isn’t the shake-up some believe Montreal needs, it clears room in the team’s bottom-six for a younger player to try and give the team some spark. Mitchell did have 17 points last season and has been excellent in the faceoff dot since coming to Montreal, but hadn’t been effective in limited minutes this year.

The Kings have had some depth issues down the middle since Jeff Carter’s long-term injury, and Mitchell will give them another option for the fourth line and penalty kill. The veteran of 617 games is familiar with the west coast from his early days in San Jose, where he broke into the league as a defensive-minded forward. Perhaps the Pacific breeze and a more secure role can give him a bit of a youthful burst for the second part of the season.

Mitchell is in the last season of a three-year, $3.6MM deal and will push the Kings a little closer to the cap ceiling. As for Montreal, who already had quite a bit of cap room even with six players on injured reserve (and thus 29 players counting towards the cap), they now have even more room to complete a splashy deal if they want to try and turn around their season right away. The Canadiens were active in the offseason, bringing in Jonathan Drouin and Karl Alzner among others, but were left with several million dollars of cap space after both Alexander Radulov and Andrei Markov left for greener (Dallas pun intended) pastures.

It also returns a draft pick to a team that is looking further from contention than anyone expected. Even with the addition of Drouin, Montreal can’t seem to generate much offense on a nightly basis and is currently led by Brendan Gallagher in goals and points. Drouin, Max Pacioretty and Alex Galchenyuk have combined for just 14 goals and 33 points, a disappointing total from a trio who have all shown elite offensive ability at times in the past. If the Canadiens aren’t able to turn things around from their 8-12-3 start, hoarding draft picks for a deep 2018 class is the likely course of action.