After missing the last few games with a shoulder injury, Tim Stutzle is expected to return to the Ottawa Senators lineup tonight according to Bruce Garrioch of Postmedia. After practice, head coach D.J. Smith wouldn’t commit and explained that Stutzle will be a game-time decision after taking warm-up. Artem Zub and Joshua Norris were also both on the ice today in non-contact jerseys as they make their way back.

Stutzle, 20, was off to a great start to the season when he went down on December 12 after just four shifts against the Anaheim Ducks. Prior to that, he scored 27 points in 27 games, the start of a breakout campaign for the third-year man. It’s not that Stutzle had been bad as a rookie or sophomore, far from it. But this year he looked like a game-changing presence every night, carrying the play and establishing himself as one of the top young talents in the league.

Given the Senators’ spot in the standings, they could certainly use him. Ottawa is eighth in the Atlantic Division, 11 points behind the Tampa Bay Lightning for that coveted third spot they were hoping to challenge for. Things haven’t gone exactly according to plan, though things are turning around of late.

The Senators are now 6-3-1 in their last ten and should get some more reinforcements next month when Norris is expected to return.

Should he return, Stutzle will jump right back into the middle of the top line between Brady Tkachuk and Claude Giroux to try and crack a two-game losing streak against the Washington Capitals.

After parts of five seasons in the minor leagues, Jake Lucchini is finally getting a chance in the NHL. The Ottawa Senators have recalled both Lucchini and Dillon Heatherington, as they deal with injuries to Tim Stutzle and Tyler Motte. Both regular forwards were absent from practice today, according to Bruce Garrioch of Postmedia.

Stutzle is expected to miss at least a week with a shoulder strain.

Lucchini, 27, was skating on a line with Rourke Chartier and Dylan Gambrell, not exactly the group that Ottawa was expecting when they started the year. It will be his NHL debut after grinding out 200 games in the AHL.

Undrafted, Lucchini played four years at Michigan Tech and was eventually named captain, before signing with the Wilkes-Barre/Scranton Penguins to start his pro career. After two years with the Laval Rocket, he joined the Belleville Senators last season and scored 51 points in 70 games.

That earned him a one-year, two-way contract, and now a chance to show what he can do at the highest level. The Senators take on the Montreal Canadiens this evening after winning two in a row.

As the Ottawa Senators head into a season filled with excitement and high expectations, general manager Pierre Dorion had some more fun for fans at today’s media availability. The team has agreed to an eight-year extension with Tim Stutzle, avoiding any restricted free agency with the young forward. The deal is for a total of $66.8MM and will carry an average annual value of $8.35MM. Stutzle is entering the final year of his entry-level contract and was scheduled to be an RFA next summer. The full details are as follows: 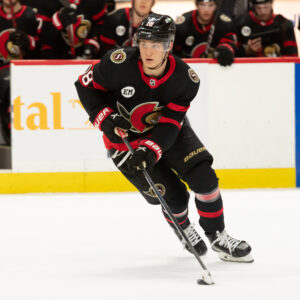 It is an eye-popping amount for the 20-year-old, who has played just 132 games at the NHL level, but Stutzle showed last season that he is on track to be a dynamic offensive player for a long time. With 22 goals and 58 points in 79 games, he trailed only Brady Tkachuk for the team lead while making the transition to center. The Senators are betting that his meteoric rise will only continue in the future, making this contract look like a bargain down the road.

That bet, while a decent one to make on a player this young and talented, also comes with a fair amount of risk. The Senators do not have unlimited funds to throw around, and with Tkachuk, Joshua Norris, and Thomas Chabot all signed for big-money deals, things may get tight down the road if any of them take a step backward. Remember, the Senators are also going to face a tough negotiation with Alex DeBrincat at some point, who has just one year left of RFA status after this season and will likely be looking for a massive contract.

Still, for a team that has had trouble retaining their stars in the past, the idea of having this core locked up through essentially their entire prime is great news for Senators fans. The drafted-and-developed talent will be sticking around, at least until the team decides it is the right time to move on.

Stutzle, the third overall pick from 2020, is penciled in as the team’s second-line center for next season and could find himself between elite talent like DeBrincat and Drake Batherson, making quite the trio. For a team that has been near the bottom of the league for the last several years, the Senators top-six (and perhaps top-nine) looks quite formidable.

This contract will certainly be held up by other restricted free agents as well, given how much it relies on projection over actual results. Stutzle has just 34 goals to his name at the NHL level, fewer than Norris scored last season alone. He will nevertheless be paid more than his older teammate, who will start his own eight-year deal this season.

Ottawa Senators general manager Pierre Dorion spoke to reporters today during his end-of-season availability, stating that forwards Chris Tierney and Tyler Ennis won’t be extended and defenseman Victor Mete won’t be issued a qualifying offer. The news doesn’t come as much of a surprise as the team likely looks to be a little more aggressive in free agency, pursuing bigger talents to help push a budding young core into playoff contention.

Tierney had just 18 points in 70 games this season, a career-low. Ennis was much more productive in an even more limited role, notching 24 points in 57 games. He should continue to find a home next season to provide solid depth scoring. Mete only appeared in 37 games this season, oftentimes a healthy scratch.

Senators goaltender Matt Murray was hoping to return down the stretch to give him an opportunity to play for Canada at the upcoming World Championships but had to shut it down last week due to post-concussion symptoms, relays Postmedia’s Bruce Garrioch (Twitter link).  It was a tough season for the 27-year-old as he was limited to just 20 games where he had a GAA of 3.05 and a SV% of .906, numbers that aren’t worth his $6.25MM AAV.  That resulted in Murray clearing waivers back in November.  With Anton Forsberg signing an extension back at the trade deadline and prospect Filip Gustavsson being waiver-eligible in 2022-23, Murray’s spot on Ottawa’s roster to start next season is far from a guarantee.

Elsewhere in the Atlantic:

The Canucks announced (Twitter link) that goaltender Jaroslav Halak has been placed into COVID protocol.  The veteran was set to get the start for today’s game against Carolina but instead, that will go to Thatcher Demko with Spencer Martin coming up from the taxi squad.  Halak has made just eight appearances this season and has a $1.25MM bonus pending when he gets to his tenth.  He’ll now have to wait a little longer to get that bonus, one that has recently landed himself in trade speculation as well.

More COVID news from around the NHL:

The Ottawa Senators have announced a pair of very different transactions for two of their young players. Tim Stutzle has been placed in the COVID protocol, likely ruling him out for the team’s return to action on Thursday. Stutzle joins Anton Forsberg in the protocol and leaves just Brady Tkachuk and Artem Zub as the regular Senators that haven’t been in the protocol this season.

Still just 19, Stutzle has 15 points in 29 games this season and 44 in 82 career matches. That’s an impressive start for the 2020 third overall pick, but it still hasn’t resulted in much success for the team overall. Ottawa is just 9-18-2 on the season despite general manager Pierre Dorion suggesting in the offseason that the rebuild is over. The team hasn’t played since January 1 thanks to COVID concerns and attendance restrictions but will be back in action on Thursday against the Calgary Flames.

While Stutzle has an isolation period to look forward to, a future teammate is looking at a much more exciting prize. The Senators have loaned Philippe Daoust to the Saint John Seadogs of the QMJHL where he will chase a Memorial Cup after starting the year with the Belleville Senators. The 20-year-old forward has five points in 15 games with Belleville this season, but after the Sea Dogs acquired his rights a few days ago it was clear that he would be heading back to junior hockey to finish the year.

Daoust, selected 158th overall in 2020, was outstanding for the Moncton Wildcats in the shortened 2020-21 season, scoring 28 points in 21 games. The Sea Dogs acquired him as part of a ten-piece trade last week as they load up for a championship run. The 2022 Memorial Cup is set to be held in Saint John, meaning the host club will get an automatic entry.

Not yet signed to his entry-level contract, Daoust was playing for Belleville on an AHL deal and will still be in line for a three-year NHL deal whenever he does sign with Ottawa.

Several of the top-rated prospects for the 2020 NHL Entry Draft, coming up on October 6-7, spoke to the media today and there was no shortage of interesting quotes, courtesy of OHL insider Mark Scheig. Saginaw forward Cole Perfetti was certainly confident and didn’t mince his words when discussing his ideal NHL landing spot. “If I was under a head coach where I had to dump the puck in every time I go out over the red line and get on the forecheck, it would be frustrating and I wouldn’t be able to express how I really am as a player,” Perfetti stated. While many NHL teams have abandoned the dump-and-chase offense, it might not have been the best idea for the young forward to state so emphatically that he could have issues in a system different from the one he is used to. NHL GM’s probably would have preferred to hear him say that he is willing to work at fitting in to any offensive structure and that his ability can adapt to new systems. Although Perfetti’s talent will be the final determinant of his draft slot, he may have rubbed some interested executives the wrong way with his bold statement. We will find out for sure come draft day if the potential top-five pick falls down the draft board.

Sweden will hold a training camp for World Junior hopefuls later this month and today published a roster for the event. That group includes top 2020 draft prospects Alexander Holtz and Lucas Raymond who both could be selected in the first ten picks. Outside of that dynamic duo, however, there are several other interesting names that could be relatively high picks.

With events like the World Junior Summer Showcase and Hlinka-Gretzky tournament canceled, the scouting season for NHL teams will be much different.

The NHL and NHLPA have crossed another hurdle to ratifying their CBA extension, the NHLPA announced. The NHL’s Executive Board has approved of the extended CBA and sent it to the NHLPA membership for a vote. The full body of NHL players still needs to cast their ballots, which is expected to take place sometime over the next 48 hours. Only a simple majority is needed to pass, per Sportsnet’s Elliotte Friedman. As we await the final vote, let’s check-in elsewhere around the NHL…