Sportsnet’s Elliotte Friedman and Bob Stauffer of 630 CHED each have linked the Edmonton Oilers with being the frontrunners to sign KHL goaltender Mikko Koskinen as the team’s backup to starter Cam Talbot. Koskinen, who has been playing with the KHL for the past six seasons, made his intentions known a couple of weeks ago that he’d like to take his talents back to the NHL.

The 29-year-old, who was a second-round pick of the New York Islanders in 2009, came overseas and played two games in the ECHL, 41 games in the AHL and four games with the Islanders, but struggled and eventually opted to return to Finland. In 31 games for SKA St. Petersburg, the goaltender posted a 1.89 GAA and a .905 save percentage.

Koskinen could be a good fit with Edmonton, assuming Talbot can rebound after a tough season. The starter went from a 2.39 GAA in 2016-17 and dropped to a 3.02 GAA this year. One key factor is the amount of games the veteran has played. Talbot has appeared in 153 games in two years if you include the 2017 playoffs. If Talbot can return to form, Koskinen could be a solid backup option where the team struggled last year. Laurent Brossoit started the year as the backup, but lost his job when he posted a 3.24 GAA. The team then traded for veteran Al Montoya, who didn’t fare much better with a 2.94 GAA in nine appearances. Montoya is the only backup who is under contract for next year at $1.06MM.

The Edmonton Journal’s David Staples writes that a backup goalie is essential to a team’s success and compares the potential signing to that of Anders Nilsson, who also struggled after being drafted by the Islanders and went overseas before signing with Edmonton. However, Nilsson struggled as a backup as well and was traded away later that same season. However, Koskinen has six years in the KHL under his belt and would be a far more likely option to be successful as a backup with the Oilers.

Friedman reported the news on Saturday’s Hockey Night in Canada.

There have already been a couple early moves today as the league prepares for the second-to-last week of the regular season. Expect more to come as injuries and college additions continue to shift roster makeup. Others will be made to specifically prepare for key match-ups, such as major playoff position battles today between the Penguins and Flyers and Predators and Jets. Keep track of all the action here:

After a busy night in the NHL, the league has just three games on tap for today. Instead, teams might use their time off to cement their status for the trade deadline and make inquiries around the league. All the minor moves we’ll keep track of right here. Refresh the page throughout the day to make sure you stay up to date on all the comings and goings.

As is always the case, Saturday is shaping up to be a busy day around the league with 22 teams in action.  Accordingly, there should be several roster moves made which we’ll keep tabs on here.

END_OF_DOCUMENT_TOKEN_TO_BE_REPLACED

It’s February, the most exciting month of the year for many hockey fans. Over the next few weeks, clubs will make decisions that will help or haunt them for years to come. The trade deadline this season falls on February 26th, and should have some interesting names on the move. Until then, we’ll continue to focus on the minor moves around the league, cataloging today’s right here.

Sunday — Friedman reports that both Brossoit and Corrado have cleared waivers. Broissoit has been assigned to the Bakersfield Condors, while Corrado is headed for Wilkes-Barre/Scranton.

Saturday — A pair of players are on the wire today as the Oilers have placed goalie Laurent Brossoit on waivers while the Penguins have done the same with defenseman Frank Corrado, Sportsnet’s Elliotte Friedman reports (Twitter link).

Brossoit’s placement comes as no surprise on the heels of their acquisition of Al Montoya from Montreal earlier in the week.  Montoya is now ready to be activated off of injured reserve with his concussion symptoms now gone so Brossoit became the odd man out.

This season, the 24-year-old netminder has posted a 3.22 GAA and a .886 SV% in 13 appearances, numbers that are well below the league average.  However, he had fared better as of late, allowing two or fewer goals in three of his last four starts.

As for Corrado, he has been up-and-down with Pittsburgh this season but has seen limited action.  In five games with the big club, he has averaged just 11:30 in ice time while being held off the scoresheet.  He has been more productive with Wilkes-Barre/Scranton of the AHL, putting up nine points in 19 games.  Although he already cleared waivers once this season, Corrado has spent more than 30 days on the NHL roster since then which requires him to pass through once again.

The Edmonton Oilers are in danger of dropping out of the playoff race completely, but they’ll get some help a little sooner than expected. Goaltender Cam Talbot has been activated from injured reserve, and could be back in the lineup tomorrow afternoon. Nick Ellis, who’d been backing up Laurent Brossoit in Talbot’s absence, was sent back to the minor leagues.

The Oilers are a frustrating team to watch at the moment, dominating possession but still unable to string many wins together. The team sits second-last in the Western Conference, and nine points out of a playoff spot after 32 games.

Unfortunately, even before his injury Talbot hadn’t been playing quite up to his standards. The Oilers need him to get back to his career .920 save percentage if they’re to get on any kind of a roll, not the .903 mark he posted through 22 games this season. With Connor McDavid back to dominating the league after dealing with flu-like symptoms earlier in the year, the team is at a crossroads. Get back to the Stanley Cup contender many believed you to be, or fall into the pit of mediocrity once again.

In Elliotte Friedman’s latest 31 Thoughts column for Sportsnet, the venerable hockey insider reports that the Edmonton Oilers at one point had some interest in Detroit Red Wings goaltender Petr Mrazek. Friedman writes that Edmonton may have backed off after watching the 25-year old goaltender struggle recently, something that seems to be a common thread all around the league. 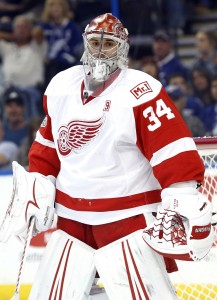 Several other teams are looking for goaltending help—Friedman himself mentions Florida and Pittsburgh—but there isn’t a shining option on the market at the moment. Mrazek could have been that star, if the aforementioned struggles hadn’t crept up on him again. Though he was once heralded as the goaltender of the future for Detroit, Mrazek has clashed with the front office in contract negotiations, and been generally outplayed by a resurgent Jimmy Howard over the past two seasons.

This year, Howard has taken the lion’s share of the work in the Detroit net, starting 22 of the team’s 29 games. He’s recorded a .905 save percentage in those games which, while not even league-average, is quite a bit better than his counterpart. Mrazek’s .888 mark is tied for fourth-worst in the league among goaltenders who’ve made at least 10 appearances. Only Maxime Lagace, Laurent Brossoit, Chad Johnson have been worse, while James Reimer clocks in at the same number.

Mrazek is young enough to improve, but his contract status as a pending restricted free agent that is already making $4.15MM is likely off-putting to many teams. A qualifying offer is likely too expensive for any team as a backup, and there is no guarantee he’d accept a lower number on a longer-term deal.

So, where else can you look around the league for goaltending help? Michael Hutchinson has been in the rumor mill lately, as the Winnipeg Jets get Steve Mason back healthy tonight. Unfortunately, Hutchinson injured himself in a minor league game this weekend (though the injury seems minor) and has been underwhelming at best during his NHL career.

Jonathan Bernier was signed by the Colorado Avalanche as potential trade deadline bait, but has been nearly as bad as Mrazek so far this year. His .891 save percentage doesn’t inspire much confidence, as consistency continues to be Bernier’s downfall.

Even a goaltender like Philipp Grubauer, who has been a potential trade target for some time due to a combination of outstanding play and clear role as the backup to Braden Holtby, hasn’t played well enough to trust this season. He, like Scott Darling and Antti Raanta this offseason, was seen as a future starting goaltender in the league just waiting for the right opportunity.

There’s not an easy answer here to the goaltending problems around the league. For teams like Edmonton and Florida, who already find themselves struggling to stay relevant in the playoff race, dealing assets for anything but a sure thing isn’t very appealing.

It’s safe to say that Edmonton’s offseason trade of Jordan Eberle to the Islanders for Ryan Strome hasn’t worked out as well as the Oilers had hoped.  Eberle is off to a strong start with his new team, posting 21 points (12-9-21) in 28 games.  However, Strome hasn’t fared anywhere near as well, collecting only 11 points (4-7-12) over that same stretch.  He has found himself moved down the lineup at times and as Postmedia’s Jim Matheson notes, he could be out of the lineup entirely tonight against Montreal.  He was in a rotation of wingers in practice on Friday (which isn’t too ideal for someone who has been deployed as a center for the majority of the season) and a final decision on whether or not he’ll suit up will come later in the day.  The fact it has even come to this further cements the thought that this trade is one that GM Peter Chiarelli may want a mulligan on.