The Canucks have filled out their coaching staff for next season.  The team announced that they have hired Mike Yeo as an assistant coach.  He takes over for Brad Shaw who is leaving Vancouver to become an associate coach with the Flyers.  Meanwhile, Vancouver has hired Jeremy Colliton as their new head coach with AHL Abbotsford, replacing Trent Cull who has been promoted to an assistant coach in Vancouver.  GM Patrik Allvin released the following statement about the moves:

We’re pleased to have solidified our Coaching staff for next season with the promotion of Trent Cull and the additions of Mike Yeo and Jeremy Colliton. These individuals bring a lot of hockey experience and knowledge to the group. We would like to thank Brad Shaw for his contributions to the club and wish him the best of luck in Philadelphia.

Yeo most recently served as the interim head coach of the Flyers after taking over 22 games into this past season when he took over for Alain Vigneault.  The 48-year-old also has head coaching experience with Minnesota for parts of five seasons and also spent four years with St. Louis, three of those as head coach so he will give head coach Bruce Boudreau some experience behind the bench.  Over Yeo’s head coaching career, his teams have compiled a 263-217-62 record.

Yeo replaces Shaw in what basically amounts to a coaching trade with Shaw taking Yeo’s old spot on Philadelphia’s bench alongside their new head coach John Tortorella.  The 58-year-old has no shortage of coaching experience with 17 seasons under his belt, five of those coming with Columbus where he worked with Tortorella so it’s not surprising that Shaw has decided to work with him again.

Colliton was Chicago’s head coach for parts of four seasons but was let go early in 2021-22.  He then joined Hockey Canada for some of their international tournaments and briefly served as Canada’s head coach at the Olympics when Claude Julien was injured.  This will be the 37-year-old’s second stint running an AHL bench having been in charge of Chicago’s farm team in Rockford for parts of two seasons before getting the job with the Blackhawks.  He takes the place of Trent Cull who will get his first NHL coaching opportunity after spending 18 years between the OHL and AHL.  He had been with Vancouver’s farm team for each of the last five seasons.

Jan 30: Colliton will be taking over as head coach of the Canadian team, as Julien is not able to travel with the team due to an injury. Frank Seravalli of Daily Faceoff tweets that Julien fell during a team-building activity during their training camp in Switzerland and suffered fractured ribs.

Jan 14: When the NHL pulled out of the Olympics, so too did the management and coaching staffs that were set to lead Team Canada. Doug Armstrong had been brought in to serve as general manager, while Jon Cooper was supposed to serve as head coach. Since they’ll be busy with NHL duties, Hockey Canada has picked a new pair of familiar faces to lead the program. 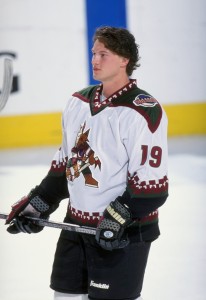 The Channel One Cup, an international tournament played in mid-December in Russia, certainly doesn’t usually draw much attention from North American hockey fans. It has been absolutely dominated by Russian teams throughout its history, as it is made up of players from club teams from outside the NHL. This year though there is a bit more intrigue, as the roster announced today by Hockey Canada likely includes many of the same players that will suit up for the 2022 Beijing Olympics should the NHL and NHLPA decide against participation.

The group that was announced today includes many familiar NHL names and is as follows:

The coaching staff and management group are also quite familiar to NHL fans, led by general manager Shane Doan. Claude Julien will serve as the team’s head coach, but after Bruce Boudreau and Scott Walker–originally pegged as assistants–moved on to the Vancouver Canucks, he’ll now be joined behind the bench by Doan and Tyler Dietrich.

Interestingly enough, the Spengler Cup coaching staff will now also have Nolan Baumgartner and Jeremy Colliton, two men that were recently let go by their NHL organizations. That tournament kicks off on December 26 and will be another pre-Olympics tune-up for players that may end up in Beijing in a few months.

The Blackhawks have decided to make a change behind the bench as the team announced that head coach Jeremy Colliton along with assistants Tomas Mitell and Sheldon Brookbank have been relieved of their duties effective immediately.  Derek King, who had been coaching with AHL Rockford, will take over as interim head coach while Marc Crawford remains on as an assistant coach.  Anders Sorenson, meanwhile, replaces King as the head coach with the IceHogs.  Interim GM Kyle Davidson released the following statement:

Our on-ice goal remains the same: to build an elite system of hockey – and we have not delivered on that. The fact is our play and competitiveness must improve. Every game, every shift. Today’s coaching changes are difficult, especially given the incredible personal connections Jeremy and others have made with our players in their development. We appreciate Jeremy’s contributions to the organization over the last three seasons, and we wish him and his family the best.

We appreciate Derek’s willingness to step in behind the bench as we embark on our search for our next permanent head coach. His NHL experience as a player and work with our younger players in Rockford over the last four years gives us great confidence in his ability to lead the Chicago Blackhawks in this interim role.

The dismissal comes three years to the day that Colliton took over from former head coach Joel Quenneville.  Over that stretch, Chicago hasn’t really progressed.  The team posted a 87-92-26 record with the 36-year-old behind the bench with their only playoff appearance coming in 2019-20 where they lost in five games to Vegas in the first round.  That, of course, was the season that the postseason was expected in the summer bubble; their record wouldn’t have been good enough to qualify otherwise. 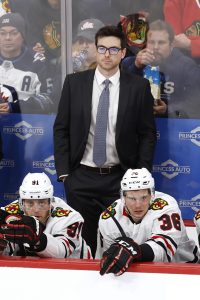 After a tough showing last season, now-former GM Stan Bowman tried to bolster the roster, adding Seth Jones and Jake McCabe to their back end, Marc-Andre Fleury between the pipes, and Tyler Johnson up front while welcoming Jonathan Toews back to the fold as well.  At a minimum, they were expected to be considerably better if not contending for a playoff spot.  Instead, they struggled mightily as Chicago has just a 1-9-2 record this season while they’ve allowed the most goals in the league with 47.  Clearly, something wasn’t working and Davidson has decided that a fresh voice is needed to try to turn things around.

While King is quite familiar with several players on Chicago’s roster having worked with them with the IceHogs since 2016-17 (including as the head coach since 2018-19), it will be his first coaching role at the NHL level of any kind.  That, coupled with the hole they’ve dug themselves in the standings, puts the 54-year-old in a tough situation, not entirely dissimilar to the one Colliton was in when he took over for Quenneville.

The fact that Davidson, himself only in the GM role on an interim basis, was given the green light to make this significant switch is noteworthy.  CEO Danny Wirtz indicated in a statement that Davidson has “our full confidence and autonomy to make hockey decisions” which certainly suggests he’ll be given consideration for the full-time GM position.  In the meantime, Chicago will be conducting parallel searches with the team looking to determine Bowman’s replacement and Davidson likely heading up the search for the full-time head coach.  It’s not too often that a team has both an interim head coach and general manager but that’s the situation that the Blackhawks now find themselves in moving forward.

ESPN’s Emily Kaplan was the first to report that Colliton had been let go with King taking over.