Back in 2017, the Hurricanes got off pretty easily in expansion as the Golden Knights selected Connor Brickley while accepting a fifth-round pick to stay away from other options.  Brickley was a pending UFA and never signed with Vegas, ultimately going to Florida instead.  Only losing a fifth-rounder is better than most teams fared back then but they’re unlikely to be similarly unaffected this time around.

There isn’t much to decide between the pipes.  Even if Carolina is considering non-tendering Nedeljkovic to avoid the potential for arbitration, he’s still the logical one to protect.  Even if they wanted to leave him unprotected and protect Helvig for some illogical reason, they’d have to first tender him his qualifier which takes away the option to avoid arbitration.  This one is easy.

It isn’t anywhere near as easy on defense.  Sure, Slavin and Pesce are the obvious selections but it gets a lot tougher from there. 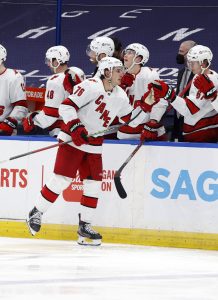 Skjei is a capable top-four defender and while his production has dried up since coming over in a trade from the Rangers, he’s still logging over 20 minutes a night and playing a significant role on their penalty kill.  He has three years left on his deal at a $5.25MM price tag.  That might be a little above market value considering the drop-off in points but if it is an overpayment, it’s not by much.  And at 27, he’s in the prime of his career.  Carolina is also less than a year and a half removed from trading a first-round pick to get Skjei so letting him go for nothing to Seattle would certainly sting.  The Kraken need to pick up some notable contracts in their draft and Skjei would become an immediate fixture for them defensively if he was to be made available.

So why isn’t he the obvious choice?  That would be the presence of Bean on the eligible list.  The 23-year-old was a first-rounder himself back in 2016 and finally was able to establish himself as a regular this season despite being involved in 50 taxi squad transactions throughout the season; that number isn’t an exaggeration but the moves gave Carolina some salary savings.  Is he ready for a top-four spot in the lineup?  If so, he could be protected over Skjei and likely move into Skjei’s spot on the depth chart.

Hamilton also has to be considered here.  He has been given permission to talk to other teams early which is a sign the two sides are far apart in contract talks but if Hamilton doesn’t get the deal he wants, he could circle back.  If Carolina was able to sign him in the next week, he would then get the final spot.  Meanwhile, Gardiner is a safe bet to be left protected after struggling in his first two seasons with the Hurricanes.

Up front, most of the spots are easily spoken for.  Aho, Svechnikov, Teravainen, and Trocheck are all locks.  Staal has a no-move clause which secures his spot as well.  Niederreiter has been up and down since joining the Hurricanes and has a high enough contract ($5.25MM) that he could be left exposed but he was second on the team in goals this year; that’d be hard to part with so let’s put him on there as well.  That’s six of the seven spots right there and enough sure-fire protectees to take away the eight-skater option which would allow them to keep both defensemen.

At first glance, Foegele would seem like the logical candidate.  He has been a capable middle-six forward and has been productive in a limited role, notching at least ten goals in three straight years.  However, he’s also arbitration-eligible and if they’re worried about Nedeljkovic’s arbitration eligibility, they could be concerned with Foegele’s as well.  If they are, there’s no point protecting him if they’re considering non-tendering him.

Fast signed a pretty cheap deal in the fall, a contract that has two years left on it at a respectable $2MM.  However, his numbers took a bit of a dip this season in more of a limited role than he was accustomed to with the Rangers.  It’s still a good value deal but losing someone that’s on the third line with some frequency wouldn’t be a bad outcome for the Hurricanes.

Geekie is still largely unproven in the NHL with 36 of his 38 career regular season games coming this season.  Most of that time was spent on the fourth line.  However, he’s going to be cheaper than the other options and plays the premium position as he’s a center.  So too does Lorentz but Geekie is a little younger which probably leaves Lorentz exposed.

When Vegas had their expansion draft, a minimum of two forwards and one defenseman had to be exposed that were under contract and played either 40 games in the most recent season or 70 over the past two combined.  Due to the pandemic, those thresholds have been changed to 27 games played in 2020-21 or 54 in 2019-20 and 2020-21 combined.  In creating our expansion list for each team in this series, we will ensure that these criteria are met.

Carolina is able to meet the requirements with the above players but it’s the restricted free agents in Bean and Foegele that will be the most attractive to Seattle.  Kraken GM Ron Francis is quite familiar with both players having drafted when he was GM of the Hurricanes.  Both are young – Foegele has two years of team control left and Bean four – which means Seattle will be getting a longer-term piece.  Bean would likely be the favorite to be selected but either way, they’re going to get hit harder this time than they were by Vegas and a fifth-round pick alone wouldn’t be able to protect everyone this time around.