The Detroit Red Wings are one of the expected sellers at this year’s trade deadline, with Mike Green leading the way in terms of players they could move. Another name, Luke Glendening, may be getting some interest as Frank Seravalli of TSN reports that both the Toronto Maple Leafs and Dallas Stars have asked about the forward. 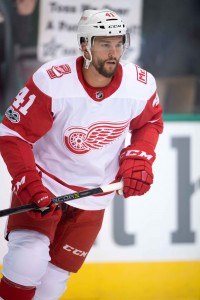 Glendening, 28, would represent the depth center that we listed recently as a potential need for the Maple Leafs and Stars, and could give both teams another penalty kill option. Signed to a four-year contract extension in 2016, he has three years left on the deal that carries a cap hit of $1.8MM per season. That number is more than reasonable for a fourth-line option, even if Glendening doesn’t offer much in terms of offense.

In 337 career games—many of which came under Toronto coach Mike Babcock when he was still with Detroit—Glendening has just 74 points. It’s his impact in the faceoff circle that is more impressive, as he’s won 53.1% of his draws throughout his career, including 57.8% this season.

Toronto has had a revolving door of sorts at the fourth-line center position for the last few years, with Dominic Moore staking the latest claim. Though Moore has done relatively well in that role lately, he’s an unrestricted free agent in the summer and will turn 38 in the summer. Frederik Gauthier, the heir apparent to the role, has struggled at times in his short NHL stints, and could be falling out of favor with the organization.

Dallas has had similar problems with their center depth this season, uncertain of the consistency Jason Spezza can provide and dealing with injuries to Martin Hanzal. Though Radek Faksa has emerged as a quality checking center, the team could still use an addition to strengthen their group for a potential playoff run. Glendening doesn’t come with a ton of playoff experience, but could likely fit into Ken Hitchcock’s system with ease.