In another pre-deadline deal, the Detroit Red Wings have sent Tomas Jurco to the Chicago Blackhawks in exchange for a third-round pick in 2017. Despite Stan Bowman’s comments to the contrary, the Hawks have indeed jumped into the deadline fray. 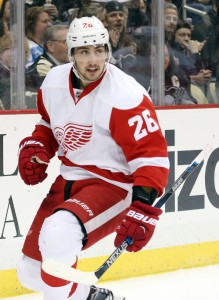 Jurco is a 24-year old winger who has yet to make a real impact at the NHL level, scoring just 39 points in 159 career games. After scoring 15 points in 36 games as a rookie in 2013-14, his play and icetime have been cut down substantially, and has been held pointless in 16 games this season. Pierre LeBrun of ESPN however reports that the Hawks have been after him for the past six weeks and really wanted him at the deadline.

Chicago does have a tendancy of turning cast off wingers into something valuable, and perhaps Jurco will be the latest in that narrative. The former second-round pick (35th overall in 2011) does seem have potential upside left to unlock. One scout told Craig Custance of ESPN exactly that: “I’ve always thought he had a little bit more skill than what we have seen from him.”

Since Jurco is earning just $900K this season, it won’t cost the Hawks much in cap-space but did require a legitimate pick. Though the Hawks have their eyes set on a fourth Stanley Cup and a very low draft number, a third rounder is still a valuable asset. Earlier this week it was enough to pry Michael Stone from Calgary, though Jurco obviously comes with much longer control. He’ll be a restricted free agent at the end of this year, and is arbitration eligible.

The Hawks don’t have much room, but don’t let Bowman fool you. He’s always involved in what’s going on at the deadline, and Frank Seravalli of TSN tweeted that he thinks Patrick Eaves—who was dealt to Anaheim just minutes prior—was also a target for Chicago. The Ducks received a second-round pick that may turn into a first depending on their playoff results, something that the Hawks may not have been willing to part with.

Chicago has sent down Vinnie Hinostroza to make room for Jurco on the roster.