As the calendar turned to December, there was some notable news around the hockey world over the past seven days which is recapped in our key stories.

Another Stroke For Letang: Back in 2014, Penguins defenseman Kris Letang suffered a stroke which resulted in doctors finding a small hole in the wall of his heart and caused him to miss two months.  He had played more than 500 games since then so it wasn’t expected that he’d have another one but that’s indeed what happened.  Fortunately, this one isn’t believed to be as severe as the one from eight years ago but there is no timetable for when he might be able to return.  Letang was off to a nice start to his season before this happened as he had a dozen points in 21 games while logging just shy of 24 minutes a night on their back end.

Clearing Waivers: A couple of years ago, Calvin Petersen was pegged to become the goalie of the present and future for the Kings and he was rewarded with a three-year, $15MM contract that began this season.  However, he struggled last year with a save percentage of just .895 and that was even worse this season, checking in at .868 through his first ten appearances.  That resulted in him being waived and clearing, resulting in a demotion to AHL Ontario where both he and the team hope that he’ll be able to turn things around.  Veteran Pheonix Copley will be Jonathan Quick’s backup for the time being.  Also clearing waivers this past week was veteran center Riley Sheahan who had his deal with Buffalo terminated; he quickly signed in Switzerland. 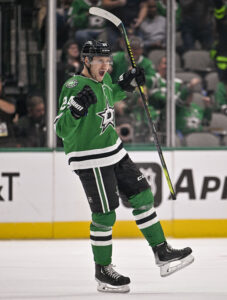 Eight For Hintz: The Stars weren’t able to reach a max-term agreement with Jason Robertson this summer but they were able to do so with one of their other core forwards as they inked Roope Hintz to an eight-year extension that carries a cap hit of $8.45MM.  The deal, which kicks in next season, also contains a no-move clause for the final seven seasons, the only ones he was eligible for trade protection in.  Hintz had a breakout year last season, notching 37 goals and 35 assists in 80 games and is off to an even better start points-wise this year, collecting 26 in his first 23 contests.  Dallas now has four forwards that will carry a cap charge of at least $7.75MM next season with Robertson – the league leader in goals, being at the bottom of that group.

Formenton Ineligible To Play: It’s not very often that a restricted free agent makes it all the way to the signing deadline without a contract and it’s rarer that a player doesn’t sign by then.  However, that’s what happened with Senators RFA winger Alex Formenton who now becomes ineligible to play in the NHL this season.  Ottawa had been trying to trade him but was unable to find a taker at their asking price which was believed to be a second-round pick.  Formenton now could try to find a team overseas to play with this season but it’s quite possible that won’t happen right away until the NHL releases its findings from its own investigation regarding the Hockey Canada World Junior 2018 sexual assault investigation; Formenton was part of that team.  The Sens will retain his rights as a restricted free agent.

Injury News: Ryan Ellis was only able to play in four games last season but that will be four more than he’s able to play this year as he has been ruled out for the season.  With him missing this much time, it’s fair to start to wonder if this is the end of his playing days even with four years left on his deal after this one.  Meanwhile, Tyler Bertuzzi’s contract year continues to not go according to plan as he’ll miss the next six weeks after undergoing hand surgery.  Injuries have limited the 27-year-old pending UFA to just nine games so far while the Red Wings will once again be down one of their top wingers for an extended stretch.  Then there’s Blue Jackets winger Jakub Voracek, who has been out for the last month due to a concussion.  GM Jarmo Kekalainen indicated this is a long-term issue while Voracek is set to meet the media on Monday to provide further clarity on the situation.