Free agency is almost upon us.  There will be several prominent players set to hit the open market while many teams have key restricted free agents to re-sign as well.  Next up is a look at the Boston Bruins.

F Jack Studnicka – We’re using the term ‘key’ here loosely but that’s simply because Boston doesn’t have any pending restricted free agents that were full-timers in the NHL last season.  Or were even in the NHL for a quarter of the games.  The closest is Studnicka who got into 15 games in 2021-22 and 20 the years before but the 2017 second-round pick hasn’t been able to establish himself yet as a full-time NHL regular.  Now waiver-eligible, Boston could look to make Studnicka an offer for the league minimum but on a higher AHL salary or even a one-way deal in exchange for keeping the cap hit down.  Those deals are quite common for players in his situation and it should play out like that here as well. 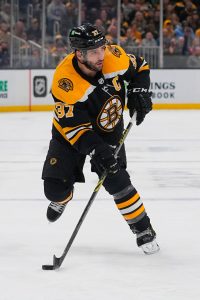 F Patrice Bergeron – The soon-to-be 37-year-old has been a fixture in Boston’s lineup for the last 18 years, spending many of those as an elite two-way center.  While he’s getting up there in age, Bergeron was still quite productive last season, finishing third on the team in scoring with 65 points in 73 games while winning the Selke Trophy for the fifth time in his career.  If he was to test the market, he’d have no shortage of interest and could command a raise on the $6.875MM he made on his expiring deal.  Of course, Bergeron won’t be testing the market and has made that clear already with his options either being re-signing with Boston or retiring; RDS’ Francois Gagnon reports (Twitter link) a deal has been agreed to and will be announced soon.  With the Bruins having limited cap space and a desire to bring David Krejci back from the Czech league, Bergeron will need to take less than market value or an incentive-laden deal to work around their cap situation.

F Curtis Lazar – The other player Boston picked up in the Taylor Hall trade, Lazar had one of his best NHL seasons in 2021-22, collecting 16 points while recording a career-high 186 hits.  He can kill penalties and has been close to a 50% player at the faceoff dot over the last three seasons.  Gritty fourth liners always generate some interest on the open market and the 27-year-old should be no exception as he’ll get a contract that’s above the $800K he made in each of the last two years.

D Josh Brown – After having a limited role in Ottawa, the Bruins picked up the 28-year-old at the trade deadline to give them some extra depth for the playoffs.  He rarely played the rest of the way, suiting up in just six games down the stretch and once in the postseason.  While that doesn’t help his cause heading into free agency, Brown has shown over his four seasons that he’s a serviceable depth defender that can bring some physicality into the mix.  He’ll have a bit of interest as a result.

At the moment, Boston has just over $2.3MM in cap space which certainly doesn’t give them any room to work with while Bergeron and Krejci would need to take contracts that are well below market value.  Accordingly, GM Don Sweeney will need to be active on the trade front to create some space if they’re going to be active in adding to their roster this summer.