With just four teams still playing, the majority of the biggest news of the week came away from the ice and is recapped in our key stories.

Prospects Released: June 1st is one of the dates to watch for when it comes to signing deadlines for certain prospects.  That came and went with teams parting ways with a total of 28 different youngsters who, depending on their age, will either re-enter the draft next month or become unrestricted free agents.  Dallas and Montreal both parted ways with players that were picked in the second round while Minnesota took the rare step of opting not to sign a first-rounder from that draft class in defenseman Filip Johansson, who went 24th overall in 2018.  As a result, the Wild will receive the 24th pick of the second round this year (56th overall) as compensation; unsigned players picked outside the first round do not yield compensatory picks.

Minnesota Surgeries: It was revealed that Wild defenseman Jared Spurgeon underwent core muscle surgery after the playoffs while winger Mats Zuccarello will need the same procedure done.  The recovery time for the procedure is six to eight weeks.  Spurgeon played through the injury for more than half the season but still managed to put up 40 points in 65 games while averaging over 21 minutes a night.  Zuccarello, meanwhile, had a career year with 79 points in 70 contests and was also playing through a leg fracture.  However, that one is expected to heal with rest and he won’t need surgery for that injury. 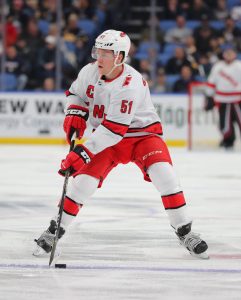 Gardiner Cleared: Hurricanes defenseman Jake Gardiner missed all of the 2021-22 season with hip and back injuries and with how much time he has missed lately, some had wondered if his playing days were over.  That won’t be the case as GM Don Waddell indicated that the veteran has now been fully cleared to return next season.  Carolina went into LTIR this season with Gardiner and his $4.05MM AAV but they won’t have that avenue moving forward.  He has one year left on his deal and with him being cleared, he could become a buyout candidate when the window opens up after the Stanley Cup Final.  The team has roughly $19MM in cap room for next season, per CapFriendly, but they have several core players on expiring deals including blueliner Tony DeAngelo, center Vincent Trocheck, and winger Nino Niederreiter.

St. Louis Signs: Martin St. Louis was surprisingly named as Montreal’s interim head coach midseason when Dominique Ducharme was let go and while it didn’t result in any sort of big turnaround, the Canadiens were more competitive down the stretch.  He did well enough to convince management to remove the interim tag as St. Louis signed a three-year contract to officially become their head coach.  The team went 14-19-4 after he took over but it was the offensive improvement from several of their players – particularly Cole Caufield – that stood out.  With Montreal expected to be rebuilding for another couple of years at least, St. Louis is an understandable choice to continue on for now with an emphasis on player development.

Kadri Out, Kane Suspended: The Avalanche suffered a big blow when Nazem Kadri was injured in the third game of the Western Conference Final on a hit from behind on Evander Kane.  He has already been ruled out for the rest of the series and potentially longer according to head coach Jared Bednar.  The 31-year-old has had a strong postseason thus far with 14 points in 13 games, carrying on his strong play from the regular season.  As for Kane, he received a five-minute major penalty on the play and was issued a one-game suspension that will keep him out of a must-win contest on Monday as Edmonton looks to stay alive in the series.