After taking a look at the upcoming free agency situation of Vincent Trocheck, we now pivot to looking at the future of his Hurricanes teammate, Max Domi. Tonight Domi hit an important milestone in his career: 500 NHL games played. Domi is famously the son of enforcer Tie Domi, who spent the majority of his career with just one team: the Toronto Maple Leafs. The stability that Tie Domi found once he established himself in Toronto is not something Max has managed in his career, and as a pending unrestricted free agent, the second Domi looks set to potentially land on the fifth NHL team of his career despite being just 27 years old.

As we previously mentioned when going over the situation of Trocheck, the Hurricanes already have significant cap dollars tied to their forward corps, (and more specifically their top three centers) and have important extensions to consider down the line. As a result, it is likely that Domi, who arrived in Carolina as part of a buzzer-beating deadline-day trade, is a pure rental for the team. So the former London Knights star looks primed to hit the unrestricted free-agent market for the first time in his career.

But what should his market look like? Domi is a bit of an enigmatic player. He is very talented offensively, having produced at an elite level once before (when he had 72 points for the Montreal Canadiens in the 2018-19 season) and having the overall skill level to appear on highlight reels. Additionally, Domi plays with a level of energy and enthusiasm that one would expect from the son of Tie Domi, and he plays a style that allows him to quickly endear himself to fans. Although coaches have mostly preferred to keep him on the wing, Domi also has experience playing center, which adds to his value. But with those positives comes a sometimes maddening level of inconsistency, as well as a shaky defensive game. Domi butted heads with coach John Tortorella in Columbus, and near the end of his tenure in Montreal, he found himself relegated to fourth-line center duty. So despite his intriguing package of skills and desirable work ethic, Domi’s overall offering as a free agent is more mixed than it may initially seem.

All of those factors make assessing what Domi could cost on the open market a challenging prospect. With many players, there are typically some generally accurate comparable players to use as a benchmark for estimating what kind of contract a player can command in free agency. But with Domi, are there many comparables that make sense for his situation? One tool we have to assess how Domi is viewed leaguewide is his trade value. It’s not perfect, as there are a whole host of factors that go into an in-season trade that are not present in the summer, but it can paint a somewhat accurate picture. 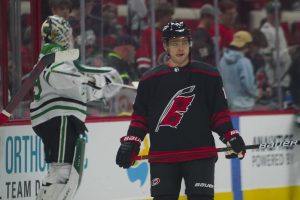 Domi’s trade was a complicated three-way deal that involved a “cap broker” and multiple assets being swapped just to account for the financial aspects of the deal. But in the end, the Blue Jackets, the team trading Domi, got just one asset in return for him, the rights to prospect defenseman Aidan Hreschuk, a 19-year-old playing for Boston College. Hreschuk was a third-round pick in 2021 and had 8 points in 37 games in this NCAA season. If that return is any indication, Domi’s value has declined sharply since a few years ago, when he was the main return in Columbus’ Josh Anderson trade and earned a contract worth over $5MM AAV.

This offseason’s market for offensive skill players is one that theoretically offers teams many options, with elite scorers such as Johnny Gaudreau, Filip Forsberg, and Nazem Kadri as the headliners, meaning Domi may not be the beneficiary of a bidding war caused by an imbalance between the supply and demand of scoring talent on the market. That means that Domi may not reach the $5.3MM AAV mark he is currently earning if he wants a long-term contract. But if Domi wants a shorter-term deal, one where he can prioritize role and fit in order to re-enter the market on the back of a better platform year, that would likely make him a desirable player for many cap-strapped teams. Domi’s 2018-19 season showed that he can score at a high level in the NHL, but he hasn’t come close to that since. His decision this offseason regarding where he wants to sign as a first-time UFA could determine if he reaches those heights again.