No regulars in Calgary’s lineup are on entry-level deals. 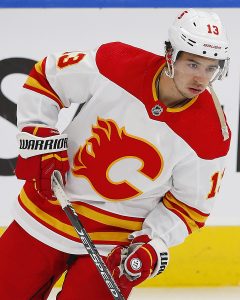 Gaudreau is obviously the UFA to watch for here.  After a couple of quieter years, he has bounced back somewhat this season and is averaging just over a point per game, a mark he has only reached twice in his career.  That will certainly give his value a boost at the right time.  There are two big questions here – what is he worth and is it worth it for Calgary to pay that?  He’ll be 29 to start next season so a max-term contract isn’t out of the question (eight years for the Flames, seven for everyone else) with the last couple being a little cheaper in salary to lower the AAV.  Still, it’s quite possible that Gaudreau pushes past the $8MM range and since he is part of a core group that has largely underachieved, should Calgary willingly pay a fair bit more to keep it together?  If Gaudreau wants top dollar, I’m not sure it comes from the Flames.

The other big one to watch for obviously is Tkachuk.  He’s subject to the old qualifying offer rule which means a $9MM offer needs to be tendered to retain his rights.  It’s hard to see him willingly taking a long-term deal at that price point so GM Brad Treliving will need to go higher than that to stop the 24-year-old from taking the offer and heading straight to UFA eligibility in 2023.  Another RFA in line for a significant raise is Mangiapane, their top goal-getter this season.  With arbitration eligibility and potentially a 30-goal year under his belt (he’s more than halfway there at 18), it’s not unrealistic to think he has a shot at doubling his current price tag.  If Calgary pays all three of those, they could be looking at adding $7MM or more just to retain their current forwards let alone add to the group.

As for the other forwards, Pitlick hasn’t had a good season and has struggled since coming over from Seattle.  He’ll likely have to settle for something closer to the $1MM range next year as a result.  Ritchie, Lewis, and Richardson have all recently gone through the UFA market and deals at just above the minimum were all they were able to get.  None have done enough to drastically improve their fortunes much beyond what they’re making now.

On the back end, Zadorov hasn’t quite fit in as well as Calgary hoped as he has been scratched at times and on the third pairing for most of the year.  That’s only going to hurt his value instead of the change of scenery from Chicago helping it.  His value is tough to peg as someone in his role should be making less than half of what he currently is but it still wouldn’t be surprising if he wound up with a deal in the $2.75MM or more range in the summer.  Gudbranson continues to be a physical player on the third pairing and after taking a cut last summer, another small dip is likely.  Kylington will be in a much different situation as he has been one of Calgary’s best offensive blueliners this season and will have arbitration eligibility this time around.  Some sheltered minutes could play a factor in a hearing but him landing something around $2MM is probably doable.  Stone is a depth player and has been for a few years now and he’ll either re-sign for the minimum or they’ll find another depth player willing to play for that salary.

*-Edmonton is retaining another $750K on Lucic’s deal

Monahan has seen his value dip in recent years and this season hasn’t gone particularly well either.  He’s not the number one center they hoped he’d be but lately, he hasn’t even been a second-line pivot.  If Monahan can get back to that level, a contract that’s only a bit below his current AAV is still manageable.  However, if his current trend continues, something in the $3.5MM to $4MM range becomes more realistic.  Lucic is nowhere near the player he once was and is now more of a role player (although with eight goals this season, he’s still contributing a bit offensively).  If he gets another contract beyond this one, it will be more commensurate with a fourth liner.

Valimaki’s bridge deal seemed reasonable at the time but after hardly playing in the first two months of the year, he’s in the minors.  Waivers will take that option off the table next season but if he’s still barely playing at that time, his $1.86MM qualifying offer could be an issue.  Mackey is on a one-way deal which warrants at least a mention here although he has been in AHL Stockton all season.  Again, that won’t be an option next year without waivers which could earn him a spot and if he can do that, he could be kept around the $1MM mark.

Vladar has impressed in his first full-time NHL role, albeit in sporadic minutes as the backup goaltender.  With how head coach Darryl Sutter is using Vladar, it’s going to be hard for him to command high-end backup money two years from now although something beyond the $2MM mark is certainly a possibility.

Backlund has been a reliable secondary scorer for Calgary while being a key piece defensively for most of the contract.  The scoring part hasn’t been there this season, however, and with Monahan and Lindholm also in the fold, he looks like a possible candidate to be moved if Treliving wants to shake things up.  Given the demand for centers, there will still be a good market for him.  Lindholm has become quite the bargain since coming over from Carolina as he has become the consistent scoring threat that he wasn’t able to be with the Hurricanes while transitioning to playing back down the middle full-time.  Assuming he can continue on that trajectory for the next few years, he could land a few extra million per year in 2024.  Dube had gradually taken some steps forward over the last couple of seasons, convincing Calgary to give him this three-year deal last offseason.  The early returns haven’t been great as he has been more of an energy player than a secondary producer but there’s still time for him to turn it around.

Hanifin isn’t a top-pairing defender as his draft stock suggested he would be when he went fifth overall in 2015 but he’s a quality top-four player who can log some heavy minutes.  He’ll hit the open market at 27 in the prime of his career and should be able to command close to a max-term contract with a fairly significant bump in pay at that time.  Tanev, on the other hand, is in the back end of his career.  While he remains a quality defender, his injury history and a lack of production make this a contract that might not age well over the last few seasons.

Following a pair of strong appearances in the Stanley Cup Final with Tampa Bay, Coleman was highly sought after on the open market despite being more of a bottom-six forward.  He brings plenty of physicality and defensive ability to Calgary although it comes at an above-average price tag.

Andersson isn’t going to be among the top point-getters among NHL blueliners but he has stepped into Calgary’s top offensive role and done well so far.  He leads all Flames rearguards in ice time and $4.55MM for a number one defenseman in terms of usage is a team-friendly deal and he’s young enough to still be able to land another long-term contract when this one is up.

Markstrom is having a very strong second season with Calgary after taking a bit of a step back in 2020-21.  When he’s at his best, he’s an above-average goalie and he’s making more than the average starter which sounds about right.  Whether this contract holds up as he ages – he turns 32 later this month with four years still to go – remains to be seen but that’s a possible concern for a couple of years from now, not today.

If the Flames can stay healthy over the next couple of months, they’re in a spot where they should be able to bank a bit of cap space to try to make a splash at the trade deadline which puts them in a better spot than a lot of teams considering how many are well into LTIR.

But there will be a balancing act for Treliving to consider.  While there’s likely to be a temptation to consider a longer-term piece, the expiring deals for Gaudreau, Tkachuk, and Mangiapane loom large.  While Calgary has more than $32MM in cap room for next year assuming the cap ceiling gets to $82.5MM as originally planned, those three alone could take upwards of 65-70% of that space and they need to fill out half a roster with that money.  Accordingly, a rental player at the trade deadline makes more sense unless there’s a core player moving out in a money-in, money-out scenario.