12:45am: The Canucks have officially announced the change, relieving Green and assistant coach Nolan Baumgartner of their duties. Boudreau has been installed as head coach and he’ll be joined by new assistant coach Scott Walker.

7:10pm: It appears another coaching change is on the horizon in the NHL.  Sportsnet’s Elliotte Friedman reports (Twitter link) that the Canucks are expected to hire Bruce Boudreau as their new head coach which suggests that Travis Green’s time behind Vancouver’s bench is set to come to an end.  Rick Dhaliwal of CHEK and The Athletic adds (Twitter link) that no move to replace GM Jim Benning has been made at this time.

This season certainly hasn’t gone as well as Vancouver had hoped.  After making a big splash to add defenseman Oliver Ekman-Larsson and winger Conor Garland from Arizona while shoring up their backup goalie position with the signing of Jaroslav Halak.  Benning’s hope was that those additions, coupled with continued development from their young core, would be enough to get them back into playoff contention.  Instead, they sit at the bottom of the Pacific Division with 18 points in 22 games, tied with Chicago for the second-fewest points in the Western Conference. 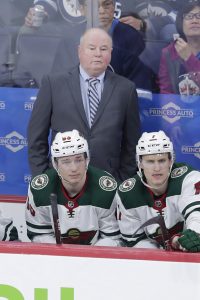 Several key Vancouver forwards have scuffled offensively this season, highlighted by Brock Boeser and Elias Pettersson both sitting at four goals, hardly the ideal output for two of their top forwards.  This is where Boudreau’s reported hiring could pay dividends as his teams have typically been higher scoring and his system could jumpstart Vancouver’s attack.  At least, that’s what the team is hoping for.  Of course, their defense corps still isn’t the strongest even with Ekman-Larsson in the fold and getting more out of that group will also be high on Boudreau’s priority list.

Boudreau is no stranger to being behind an NHL bench as he sits just 16 regular season games shy of 1,000 for his coaching career which includes stints in Washington, Anaheim, and Minnesota, putting him 29th in NHL history in that regard.  His .635 points percentage sits seventh all-time among those who have coached at least 200 games.  The 66-year-old last coached in the 2019-20 season although he was set to be on Canada’s staff as an assistant coach for some upcoming international tournaments later this month.

Green will become the second coach to be fired this season and third departure overall (the others being Jeremy Colliton and Joel Quenneville who resigned from Florida).  He was in his fifth season behind the bench and had a 133-147-34 record along with only one playoff appearance in 2020 where they fell in the second round to Vegas.  He signed a two-year contract extension back in May but won’t be making it to the end of that deal.  Meanwhile, Sportsnet’s Iain MacIntyre notes (Twitter link) that Boudreau will receive the same term which means he’ll be under contract with the Canucks through 2022-23.

Boudreau will be joined by Scott Walker as an assistant coach, reports TSN’s Darren Dreger (Twitter link).  This would be Walker’s second stint with the Canucks having worked with them for three seasons in player development before moving onto Arizona.  The veteran of over 800 NHL games as a player is currently the President of Hockey Operations for Guelph of the OHL and was expected to coach alongside Boudreau as an assistant in those upcoming international tournaments for Canada.