Hoglander had a nice rookie season, notching 27 points in 56 games while finishing eighth in Calder Trophy voting.  He’s likely to be in a middle-six role for the next couple of years which could have him in bridge contract territory although if he’s able to improve his production a little bit, his camp could look at recent deals for Joel Farabee and Drake Batherson as potential comparables.  Podkolzin is coming to North America after spending the last two years in the KHL and should play a regular role fairly quickly.  They may ease him based on their current winger situation which makes it tough to project his next contract but he’s someone that should be part of their long-term plans and will get more expensive over time.

Rathbone didn’t look out of place in a late stint last season but with their depth, he will likely have to start in the minors.  However, the 22-year-old is probably going to be one of the first recalls and as a result, he will have a few opportunities to produce.  That could help him earn a cheap one-way deal for 2022-23 but at this point, it’s unlikely he’ll hit his bonuses.

Boeser’s deal is one of the ones that ultimately played a role in the rule change of the new CBA which creates the second calculation for a qualifying offer at 120% of the AAV instead of just the final-year salary.  That rule doesn’t apply to him so he’ll be owed a $7.5MM qualifying offer next summer where he’ll be a year away from UFA eligibility if a long-term extension can’t be reached by then.  He’s heading for a big raise either way.  Motte has become a very effective energy forward and those players have still commanded good contracts on the open market so his next deal could approach double his current rate.  Sutter’s market value was basically just established earlier this offseason and his value probably won’t jump significantly after next season.  Di Giuseppe and MacEwen will fill depth roles and those spots will need to be at or near the minimum for the foreseeable future.

Hunt has held down a regular spot on an NHL roster the last few years even though it hasn’t yielded a lot of NHL action.  He’s a power play specialist and he has been claimed on waivers before so it will be interesting to see if Vancouver keeps him as their seventh defender or tries to send him down.  Juolevi had a limited role last season which made taking a one-year deal the smartest route for both sides.  He’ll need to establish himself as a regular on the third pairing to have a shot at getting any sort of notable raise.

Halak comes over from Boston and will be a nice mentor that can push for playing time.  At 36, he’ll be going year-to-year moving forward.  Worth noting is that his bonuses are quite achievable, $1.25MM for 10 games played and $250K for a .905 SV%.  Vancouver is probably going to be in LTIR all season long so those bonuses (plus any others the prospects hit) are going to come off their Upper Limit in 2022-23.

Horvat has been a key player down the middle for his seven-year NHL career, logging tough defensive minutes while still chipping in offensively.  His contract has proven to be a nice bargain for the Canucks but the 26-year-old will be in line for a max-term deal and a significant raise two years from now.  The same can probably be said for Miller who has established himself as a top-line forward after coming over from Tampa Bay while playing well down the middle when called upon which will only help his value.  It will cost a lot more to keep these two around long-term.  Dowling provides some extra depth up front but is a candidate to be waived if someone else pushes him out of the lineup.

Ferland has missed most of the last two years with concussion trouble and there are questions about whether or not he’ll be able to return or even if he should try.  He’s likely to go on LTIR and that will be important to keep in mind once we get to the Unsigned Players section.

Hamonic earned this deal after playing for considerably less last year but the fact he was willing to go outside Western Canada certainly bolstered his leverage.  He won’t produce much but if he can log around 20 minutes a night, they’ll be fine with this contract.  Schenn is another low-cost depth option and could be a candidate to be waived as well if someone like Rathbone forces Vancouver’s hand and plays well enough to earn a full-time roster spot.

Pearson re-signed with Vancouver just before the trade deadline with an extension that looked a little high based on the season he was having and where he fits in on their depth chart but unlike some of the similar-priced deals to their now-former role players, this one won’t hurt as much.  Vancouver used Dallas’ expansion situation to their advantage to add and sign Dickinson as their new third-line center, bumping Sutter down a line in the process.  Dickinson hasn’t put up much in the way of offensive numbers but he should get an opportunity to play a bit of a bigger role which would help justify the contract. 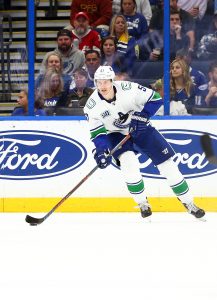 Myers’ contract has not been favorably looked upon from the moment it was signed.  He had his limitations in Winnipeg and is better off in a more limited role than a top-pairing one but Vancouver still handed him a significant contract and a big role.  Barring an uptick in offensive production, he was going to have a hard time living up to it and that hasn’t happened yet as his point-per-game averages have been close to what they were with the Jets.  He’s a capable blueliner in the right spot on the depth chart but they are going to be hard-pressed to get any sort of value out of this deal.

*-Arizona is retaining $999K on Ekman-Larsson’s contract each year.

Garland was brought over as part of the Ekman-Larsson trade and while the blueliner was the headliner, Garland is still a significant addition.  He was one of Arizona’s top scoring threats the last two seasons and will have the opportunity to play a top-six role in Vancouver.  A boost in production with the change of scenery could make his deal a team-friendly one.

The same can’t be said for Ekman-Larsson.  He’s coming off a tough season and the final few years of that contract could be a concern given all of the tough minutes he has logged over the years.  He’ll certainly be a big addition for now but this contract could cost them the services of one of their other key veterans down the road.  Poolman’s contract was one of the more puzzling ones in free agency.  He’s a decent third pairing stay-at-home option but those players don’t typically command four years on the open market.  Clearly, GM Jim Benning thinks he can bring more to the table than he did with Winnipeg.

Demko has very limited NHL experience – just 72 regular season games – but did well in what was a tough year for Vancouver in 2020-21.  He may not be ready to be a 55-plus-game starter – that’s why Halak was brought in – but he’s definitely ready to take on the heavier side of the workload between the pipes.  It may take another year or two but he’s capable of establishing himself as a strong number one and if that happens, this will be a big bargain for Vancouver.

Pettersson looked to be on his way to another season of being near a point per game before missing the final 30 games due to a wrist injury.  That shouldn’t affect his next contract too much though.  He has established himself as a top liner although he may be better off as a winger than a center moving forward which could cost him a little bit on this next deal since centers tend to get a bit more of a premium than wingers.  A bridge deal would be in the high $5MM to low $6MM range while one that buys out UFA eligibility will cost a couple million more.

Hughes has a bit less leverage than Pettersson with the shorter track record and isn’t eligible for an offer sheet.  However, he has two years of high-end production and he already looks like a premier point-producer among NHL defensemen.  We’ve seen those players get paid considerably this offseason and his camp undoubtedly will be wanting to use those as comparables in negotiations.  The potential price tags are likely similar to Pettersson’s thresholds.

By the time you factor in Ferland’s LTIR situation and Vancouver’s cap space, the Canucks are going to have somewhere between $13MM-$14MM in cap room, slightly more than that if they carry a roster below the maximum size.  Even so, that’s probably not enough to sign both Hughes and Pettersson to long-term deals which is why the expectation has been that one would get a bridge and the other a long-term contract.  We’ll find out over the next few weeks who gets which one.

The cap is going to be an issue for a while for Vancouver.  While they have just $53MM committed for 2022-23 right now, that goes up quickly once the two RFAs sign while Boeser gets his guaranteed big raise plus the expected bonus overage penalty.  That won’t leave much short-term wiggle room and a year later, they’ll be contending with bigger deals for Horvat and Miller.  There isn’t a lot of long-term money on the books compared to some teams but it’s difficult to see how they’re going to keep this entire core intact over the next few years with a salary cap that isn’t going to rise very much or very quickly.