The Minnesota Wild have re-signed winger Kirill Kaprizov to a five-year, $45MM contract. The deal carries a $9MM average annual value and takes him through the 2025-26 season. Daily Faceoff’s Frank Seravalli reports that the deal carries a no-movement clause for the final two years. Elliotte Friedman of Sportsnet reports the full salary breakdown: 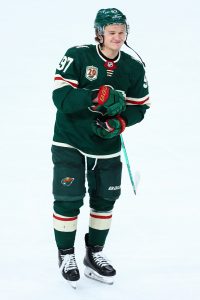 Minnesota had to wait five years after they drafted Kaprizov to see him in NHL action, but all can agree that he was worth the wait. This year’s Calder Trophy winner, Kaprizov was nearly a point-per-game talent. Playing over 18 minutes a night, the 23-year-old Russian led the Wild with 27 goals and 51 points, only missing one game all year. The Athletic’s Michael Russo reports that he’s due to arrive in Minnesota tomorrow and will deliver an in-person press conference pending vaccination status.

A full training camp and another year of acclimation to North America are both good omens for Kaprizov’s performance in 2021-22. A dominant scorer and a lethal power-play presence, Kaprizov aims to not only lead the Wild but to be one of the best talents in the Western Conference. Kaprizov put together a remarkable two-way performance for a rookie last season as well, posting a 51.2% Corsi for at even strength and boasted impressive advanced analytics as well. Steps forward in any regard will solidify his status as an elite talent and quickly make this deal worth its price tag.

The move comes after months of negotiations and nervousness on the part of Wild fans. The term and the dollar amount aren’t necessarily a surprise to anyone who’s been closely following the situation, however. A $9MM cap hit was reported as the likely value by The Athletic’s Michael Russo weeks beforehand.

Despite all the fanfare made about Minnesota’s salary cap situation this offseason following the buyouts of Zach Parise and Ryan Suter, the Wild still remain in decent shape for 2021-22. Kaprizov was the only remaining restricted free agent on the roster, and they’re still left with $3.2MM in space considering a 22-man roster. The true crunch comes next season, where the cap penalty due to the buyouts increases by a full $8MM.

Regardless, it’s an immediate relief for Wild fans, who’ll have five more years (in all likelihood) of a player who captured the eyes and hearts of many this season. Expected to be a franchise cornerstone moving forward, the Wild now look to push even further towards contention.