The Winnipeg Jets and Neal Pionk won’t need their upcoming arbitration hearing after all, as they’ve agreed on a long-term contract instead. The RFA defenseman has signed a four-year deal that will carry an average annual value of $5.875MM. Pionk’s hearing had been scheduled for Friday. PuckPedia reports the full breakdown: 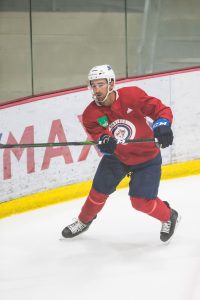 It’s easy to underestimate just how strong a player Pionk has become because of the market he plays in and the high-profile player he was traded for. Acquired as part of the package for Jacob Trouba, the 26-year-old defenseman has become one of the most reliable offensive defensemen in the league. In fact, since joining the Jets in 2019, Pionk ranks 13th among all NHL defensemen in scoring with 77 points in 125 games. That’s more than twice as many as Trouba, who signed a seven-year, $56MM deal with the Rangers upon arrival.

That’s not to say the two are directly comparable, but is just evidence to show how valuable Pionk has become in Winnipeg. He has averaged nearly 23 minutes a night since arriving, contributing to both the powerplay and penalty kill. When the Jets’ need for a defenseman was discussed at length this season it was to find Pionk some help, but his place on this team will continue to be a leading one.

By buying out two years of unrestricted free agency, the Jets have locked up Pionk through his prime, but it didn’t come at much of a bargain. After acquiring Nate Schmidt and Brenden Dillon this offseason, the team now has five defensemen making at least $3MM for the next three seasons. Winnipeg now sits just barely under the salary cap ceiling but still has a lot of work to do, with an arbitration case for Andrew Copp on the horizon. The team does have some wiggle room as Bryan Little will be placed on long-term injured reserve again, but it isn’t a lot considering they have just nine forwards signed to one-way deals at the moment.

Committing so much to the defense is not usually a bad plan, but it’s unclear exactly how the Jets expect to give their young options playing time now. Logan Stanley, Ville Heinola, Sami Niku, and Dylan Samberg are all ready to contribute, but the route to the roster is pretty much blocked through 2023-24. There will be one regular spot to fight over when the season begins (injuries notwithstanding), with Stanley obviously having the inside track after his performance this year.

For Pionk, this contract is basically perfect, giving him a huge raise through the next several years while still letting him test free agency at a young enough age to land another multi-year deal.