Vesalainen has yet to live up to his first-round draft billing but he spent most of last year up with Winnipeg either on the active roster or the taxi squad while also getting into four playoff contests.  Unless they need to fill his roster spot with a minimum-salaried player, he should have an opportunity at a full-time roster spot, albeit on the fourth line which won’t help his odds of reaching any of his incentives.  Gustafsson hardly played with Winnipeg last season but with the departure of many of their depth players, they’ll need to fill some of those spots from within which gives him an opportunity for a regular spot in the lineup.  Heinola is likely on the outside looking in to start the year but he has impressed in the minors and could push his way into a regular role as the season progresses. 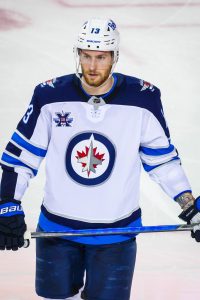 Last season was one to forget for Dubois.  After settling for a two-year bridge deal, he very quickly played his way out of Columbus with the Jets parting with both Patrik Laine and Jack Roslovic to bring him in, shoring up their center depth in the process.  However, he struggled relative to expectations with Winnipeg, notching just 20 points in 41 games and was quiet in the playoffs with just three assists in seven contests.  A year ago, it seemed like his 2022 contract was going to be the big one that pushed him comfortably past the $7MM AAV mark, especially with his qualifying offer being $6.65MM.  But if he doesn’t have a much-improved 2021-22 season, that qualifying offer may be his best-case scenario.

Copp is coming off a career year but basically was forced into taking the one-year deal earlier this month to keep Winnipeg as close to cap-compliant as possible.  A repeat performance should push his AAV over the $4MM mark.  Stastny stayed in the top six for most of last season with Dubois often lining up on the wing and his price tag is a little below market value for a top-six center, especially compared to some of the other deals out there.  He’ll be going year to year from here on out and the Jets may need to use his money to re-sign Copp next summer.  Nash and Harkins will be role players and with their cap structure, the spots they occupy will need to be filled by minimum-salary players down the road whether it’s those two or other options.

The two defensemen in this category appear to be the possible cap casualties to free up the little bit of extra space to get cap compliant once LTIR is factored in (more on that later).  Beaulieu can hold his own on the third pairing but his spot could be filled by someone cheaper.  Niku, on the other hand, has been in trade speculation for a couple of years now.  They don’t want to lose him on waivers but with such limited recent action (he played just six games last season), they may have to settle for that if something doesn’t materialize over the next couple of months.

Comrie has bounced around on waivers the last couple of years but has hardly seen any NHL action.  That will change next season as their cap situation necessitated a minimum-salaried backup and he will get the first shot at being that player.  A good showing would certainly bolster his case heading into his final arbitration-eligible year but at the same time, he could potentially price his way out of Winnipeg if he did well enough to earn a sizable jump.

You could basically put any minimum-salaried forward into Toninato’s slot and perhaps there’s a signing or waiver claim to come that pushes him out.  In the meantime, the fact he received a two-year deal last month that includes a one-way second year suggests Winnipeg believes he can lock down a regular spot on the roster.

Stanley really improved his stock last season, going from someone who looked like he’d be on the outside looking in at a spot in the lineup to a player who was in more often than not, albeit in a limited role.  The small track record allowed the Jets to get him on a cheap bridge deal, one that won’t be very hard to out-perform.

Let’s get Little out of the way first.  He hasn’t played since early November 2019 and is still trying to recover from a perforated eardrum.  GM Kevin Cheveldayoff has suggested the expectation is that Little won’t be able to return.  He’ll head for LTIR, allowing Winnipeg to exceed the cap by up to his full cap hit (the cost of their active roster at the time of placement will determine exactly how much they can go over).

Very quietly, Scheifele has performed at a point-per-game average or better for each of the last five seasons, becoming a legitimate star in the process.  Considering centers with similar production have been getting considerably more, this is a contract that is well below market value.  The same can’t be said for Wheeler.  He still has been productive but his per-game output has declined the last couple of years and as he’s about to turn 35, there probably isn’t another 91-point season in his future.

Dillon was brought in just before free agency to shore up a back end that had yet to really recover from the 2019 exodus.  As long as he can log 20 minutes a game on the second pairing and provide his usual physicality and strong defensive presence, he’ll provide good value on his deal.  DeMelo is someone that they hoped could play on the second pairing last year when they signed him to that contract but he is better off on the third pairing with more sheltered minutes.  That makes the deal an overpayment which is why he was made available to Seattle in expansion.

Hellebuyck has been the NHL’s workhorse goaltender over the last four years.  He has faced the most shots in each of the last three seasons and led the league in minutes played four years ago.  He makes a bit more than most starters but the small premium is certainly justified and it allowed the Jets to go with a low-cost backup in Comrie knowing that he will once again handle a significantly higher workload than most starters will.

Connor is coming off his fourth straight season of 50 points or more, an impressive feat considering there were only 56 games in 2020-21.  He has become a legitimate top-line winger and is getting paid a bit less than a top-line winger would typically get on the open market.  Ehlers hasn’t been able to produce as consistently as Connor but has shown flashes of top-line ability and fits in well on the second line otherwise.  They’re getting good value with him.  Lowry opted for stability over what almost assuredly would have been a bigger contract in unrestricted free agency, giving Winnipeg a quality third center at a below-market cost.  There aren’t any issues with the long-term contracts they have up front.

There’s the potential for the same to be said on the back end.  Morrissey isn’t a true number one blueliner but he isn’t being paid like one either.  He’s better suited as a number two defender and that’s what he’s being paid as.  Pionk has impressed since coming over from the Rangers, taking his offensive game to another level and establishing himself as a strong top-four option as well.  As for Schmidt, he was that with Vegas but struggled in Vancouver last season, allowing Winnipeg to pick him up for only a third-round pick.  If he gets back to his previous form, he’ll be a big pickup for the Jets and provide some value on his deal.  If he doesn’t, this is a contract that could be problematic in the years to come.

For next season, the roster basically is what it is at this point aside from needing to move out a defenseman and perhaps trying to upgrade the minimum-salaried players.  Winnipeg is capped out and as they’ll be using LTIR all season long, they won’t be able to bank any space to try to add someone closer to the trade deadline.  Cheveldayoff’s heavy lifting is done.

The 2022 offseason will be an interesting one as they’ll have roughly $20MM in room (after backing Little’s contract out) but will basically be trying to sign nearly half a roster as they’ll have just a dozen players under contract.  Dubois and Copp (if re-signed) will take up close to half of that space.  As a result, expect Winnipeg to have a similar back of the roster composition for a little while where the last few spots are basically interchangeable with players at the minimum salary.

They’ve committed to this core roster for the foreseeable future and there won’t be any wiggle room to supplement it with other proven pieces.  Only time will tell if this core group that has been bolstered with the defensive upgrades is good enough to go on a run in the West.