Few defensemen have seen their stock drop as significantly as Sami Vatanen’s has the last couple of years.  Two seasons ago, he was a fixture in New Jersey’s top four.  Even in 2020-21, he had plenty of playing time but had a soft free agent market to the point where he had to take more than a 50% pay cut to simply stick with the Devils. 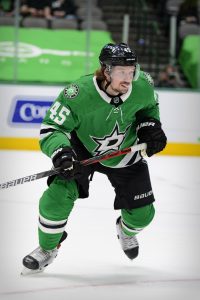 Last season certainly only made things worse.  Vatanen was dropped to a spot on the third pairing for New Jersey and didn’t fare particularly well.  Widely speculated as a surefire trade candidate at the deadline, the Devils couldn’t find a taker and simply wound up waiving him where Dallas scooped him up.  His role didn’t really change and neither did his performance, sending him to the open market coming off the worst season of his career.

Nevertheless, there is still enough upside with Vatanen that landed him on our Top 50 UFA list for the second year in a row, albeit at a much lower spot this time around.  The 30-year-old saw his production fall off a cliff last season but before that, he had averaged 28 points per game over the previous six seasons.  Sure, his days of being a 30-plus-point blueliner are probably done but something in the high teens/early 20’s is still a possibility; he did that as recently as 2019-20.

Vatanen is also a right-shot defender which is something that many teams are often coveting, particularly at the trade deadline.  He’s someone that can still play on the second power play unit if needed and log 15 or more minutes at five-on-five.  That’s not an exciting profile compared to the player he was but he can still fill a useful role.

Given that he can’t be commanding a sizable salary based on the year he had, he’s someone that a contending team may be looking to add for cheap now.  Conversely, a rebuilding team could view Vatanen as someone that can hold a spot to allow a prospect to develop a little longer in the minors before looking to move him down the stretch.

In the East, the Blue Jackets don’t have much in the way of proven right-shot defensive depth with long-time fixtures Seth Jones and David Savard departing over the last few months.  They’re not looking to win now but Vatanen’s presence could allow someone like Andrew Peeke to spend a bit more time in the AHL.  Savard’s new team in Montreal still could use a right-shot defender with Chris Wideman currently projecting to be on their third pairing despite not being in the NHL the last two seasons.  Pittsburgh could use Vatanen in the role vacated by Cody Ceci who signed in Edmonton but Vatanen’s price tag would need to come pretty close to the minimum which he may not be willing to do at the moment.

Arizona’s defensive makeover still needs another couple of players and for all of the contracts the Coyotes have taken on, they still have plenty of cap space.  Calgary only has two proven righties on the back end if they don’t want to shift one of Juuso Valimaki or Oliver Kylington to their off-side and could fit Vatanen in on the third pairing.  Vatanen’s original team in Anaheim added some low-cost depth blueliners to contend for a roster spot but he’d still represent an upgrade on those players if they wanted to try to rebuild his value and flip him later on.

Vatanen ranked 43rd on our Top 50 UFA list with a projected one-year, $1.5MM deal.  At this point, it stands to reason that he’d have taken an offer like that had it been there so he may have to take a further pay cut once again.  If he can bounce back offensively, his next contract, whatever it winds up being, has the potential to be a team-friendly one.