The New Jersey Devils have decided to trade captain Andy Greene, sending him to the New York Islanders in exchange for David Quenneville and a 2021 second-round pick. Greene waived his no-trade clause to go to the Islanders, where he will be reunited with GM Lou Lamoriello who originally signed him as an undrafted free agent in 2006. 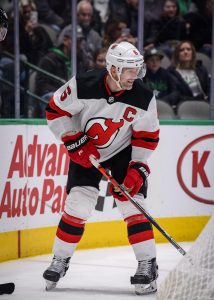 Greene, 37, has spent his entire career to this point with the Devils and was named captain in 2015. The minute-munching defenseman is in the final season of a five-year, $25MM deal negotiated in 2014 and is scheduled to become an unrestricted free agent in the summer. Even as the end of his career creeps closer, Greene has still been a reliable option on the back end, logging more than 20 minutes a night for the Devils and leading their penalty killing efforts.

That’s exactly the type of addition the Islanders were looking for after losing Adam Pelech for the rest of the season. Greene can slide right into their structured defensive system and give head coach Barry Trotz another veteran option to deploy in their playoff hunt.

The Devils have been forced to move on from some of the team’s most recognizable faces after a disastrous first half, trading Greene and Taylor Hall, while firing John Hynes and Ray Shero. It’s tough to watch the team be dismantled, but a second-round pick is a solid return to help the rebuild efforts.

Quenneville, 21, is essentially just a throw in to balance the number of contracts, given that he has found little success in professional hockey to this point. The brother of former Devils prospect John Quenneville, he has split the season between the Bridgeport Sound Tigers of the AHL and Worcester Railers of the ECHL. The seventh-round pick has another year remaining on his entry-level contract.