We’re in the home stretch in our thankful series where PHR will continue its look at what teams are thankful for as the second half of the season gets underway.  We’ll examine what has gone well in the first half and what each team may be looking for at the trade deadline.  Next up is the Vegas Golden Knights.

What are the Golden Knights most thankful for?

Considering the team’s inability to show any consistency throughout the year, Vegas should be thankful they remain at the top of a stacked Pacific Division. The team remains tied with the Arizona Coyotes with 54 points, and while that might make a competitive division on its own, there are several teams breathing right down their necks. Both the Edmonton Oilers and Calgary Flames each are one point away from the divisional lead with 53 points, while the Vancouver Canucks round out the top five with 52 points, which should make for a exciting finish at the end of the season. However, that small lead in the standings now could be exactly what they need down the road.

Who are the Golden Knights most thankful for? 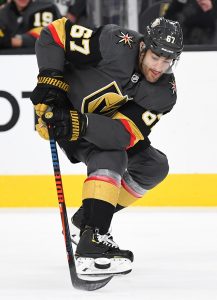 Many thought that the Golden Knights might have made a mistake when they traded Tomas Tatar, Nick Suzuki and a second-round pick for Pacioretty last summer. However, the one forward that the Golden Knights have been able to count on this year is Pacioretty, who made the all-star team and is on pace to return to his 30-goal form from his Montreal days. The 31-year-old has 20 goals and 45 points in 47 games and has been one of the few consistent players on the squad.

What would the Golden Knights be even more thankful for?

Some wins at home.

One thing that Vegas could count on in the past is they were dominant at T-Mobile Arena. They had a 29-10-2 record in their inaugural season and a 24-12-5 record last season. That’s just 22 losses in two seasons. This year, the team has already accumulated nine losses through the first half of the season and have lost two straight at T-Mobile. The team needs to get that home mojo going once again if they want to stay at the top of the Pacific Division, something that the team has never really had a problem with.

What should be on the Golden Knights’ Wish List?

As reported earlier, the Golden Knights are on the lookout for defensive help. While the team is loaded on offense, it hasn’t gotten the same consistent defensive effort from their blueline as players like Nate Schmidt, Brayden McNabb and Shea Theodore have been a little more inconsistent. Throw in a rookie in Nicolas Hague and an aging Deryk Engelland, the team could use a top-four caliber blueliner who can step in and help the team out. The problem, of course, is that the team has little cap room to work with and very few moveable pieces that it could move out, leaving the team budget hunting to fix the defense at the upcoming trade deadline.