The New Jersey Devils have extended one of their key forwards, but unfortunately it’s not Taylor Hall. The team has reached a seven-year extension with Nico Hischier that will carry an average annual value of $7.25MM. Hischier is in the final year of his entry-level contract and scheduled for restricted free agency next summer. Chris Johnston of Sportsnet and PuckPedia provide the full breakdown: 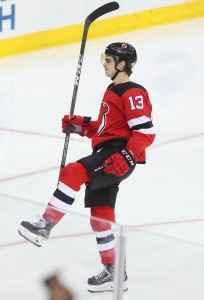 The first-overall pick from 2017, Hischier stepped directly into the NHL and had immediate success on a Devils team that shocked many by making the playoffs in the Eastern Conference. Scoring 52 points he trailed only Hart Trophy-winner Taylor Hall for the team lead, but actually finished seventh in Calder Trophy voting thanks to an impressive rookie class (Mathew Barzal and his 85-point season took home the award).

While his sophomore season was marred by injury and he’s already been banged up this year, Hischier hasn’t disappointed fans in New Jersey that saw him as a rock-solid two-way center in his draft class. Slotting him in along with Jack Hughes as the team’s top-two pivots for years is the basis of a very good forward group, even if it’s not paying off so far this season.

After a summer which saw several star restricted free agents miss part of training camp and the preseason, teams are locking up their young names even quicker this time around. Hischier joins names like Alex DeBrincat, Clayton Keller and Thomas Chabot signing long-term deals well before they hit the open market.

Because he hit the NHL so young, a seven-year extension actually buys out three UFA seasons for Hischier, keeping him at a reasonable price for the Devils to work with. While his offensive totals haven’t quite popped off the page so far, his underlying numbers and defensive ability make for a very valuable player.

For the Devils, who desperately want to extend Hall if they can before he hits unrestricted free agency, getting Hischier done now gives them a ton of cost-certainty moving forward. Hughes won’t need an extension for another few seasons, while P.K. Subban and Damon Severson are locked in through at least the 2021-22 season.

Pierre LeBrun of The Athletic was first to break news of the deal.