Free agency is now just a couple of weeks away from opening up and there are quite a few prominent players set to hit the open market while many teams have key restricted free agents to re-sign.  The Blackhawks have most of their team under contract with only a few depth players needing new deals.  Here’s a closer look at their free agent situation.

Key Restricted Free Agents: F Brendan Perlini – While he didn’t get quite the attention that Dylan Strome did in the trade that brought them over from Arizona, the winger quietly put up a dozen goals in 46 games following the move despite not getting much in the way of power play opportunities (or ice time as he averaged less than 11 minutes a game in Chicago).  Consistency is a concern but he’ll be given a chance to carve out a bigger role next season.  Perlini is coming off of his entry-level contract and isn’t eligible for salary arbitration.  A bridge deal (one or two years) is almost certainly going to be the end result here.

D Gustav Forsling – This past season was a tough one for the blueliner.  He had an opportunity to grab hold of a regular spot in the lineup but instead missed time with three separate injuries and could never really get going.  As a result, there are some questions about whether or not he still has a future with Chicago, especially after they went and added Olli Maatta last weekend.  The upside is still there and at the very least, there will be some trade interest if the Blackhawks decide to move on.  Either way, a one-year bridge contract is likely. 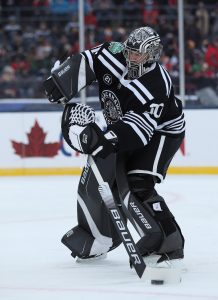 Key Unrestricted Free Agents: G Cam Ward – Chicago brought Ward in to give them a veteran backup behind Corey Crawford.  They were hoping that he’d be able to rebound with a change of scenery after some tough years with Carolina.  It didn’t happen.  Instead, he had his worst goals-against average since his rookie season and the lowest save percentage of his career and he didn’t provide much stability when Crawford was felled by a concussion once again.  The Blackhawks indicated their intentions with Ward a while back when they signed Collin Delia to a three-year deal so it’s clear that the 35-year-old will be hitting the open market.  There are quite a few teams in need of a new backup this summer but Ward will need to take a significant pay cut on the $3MM he made in 2018-19 to have a shot at another deal.

F Marcus Kruger – His second stint with the Blackhawks didn’t go as well as his first.  He spent most of the season on the fourth line and had the lowest full-season point total of his career.  Kruger’s days of being an impact checker appear to be done but teams looking for extra depth down the middle could check on him as the offseason goes on.  Any new deal he gets will be at a much lower price tag than the $3.083MM AAV he had on his last contract.

Projected Cap Space: Chicago is in a spot they haven’t been in a long time.  They actually have considerable cap space to work with this summer with only $65.7MM in commitments for next season so far, per CapFriendly.  Without any prominent players in need of new deals, GM Stan Bowman has some room to shop this summer but with new deals for Strome and winger Alex DeBrincat on the horizon a year from now, some of that activity is likely going to be of the one-year variety.