Free agency is now a little more than a month away from opening up and there are quite a few prominent players set to hit the open market while many teams have key restricted free agents to re-sign.  That’s not really the case for Arizona this summer as there are few big names for them to sign, but here is a breakdown of their free agent situation.

Key Restricted Free Agent: F Lawson Crouse – While the team may not have any truly elite players who will be restricted free agents, the team will make it a priority to sign Crouse, who put together an impressive season with Arizona as a key member of the team’s fourth line. The 6-foot-4, 220-pound winger took off in his third season with the Coyotes. The former 11th overall pick in 2015 by the Florida Panthers, the Coyotes acquired Crouse along with the hefty contract of Dave Bolland, and finally are starting to the move pay off. Crouse, not only 11 goals and 25 points for Arizona this year, more importantly, he contributed 288 hits, giving the team some much-needed physicality. 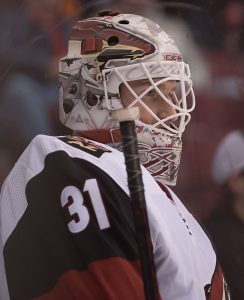 G Adin Hill – While he isn’t likely to be considered among the starting tandem next year in Arizona, the team saw quite an improvement by the 23-year-old Hill, who was recalled after the injury to both Antti Raanta and Darcy Kuemper mid-year, and fared well in a stint as the full-time starter as he won seven games for the Coyotes. While teams eventually started to figure him out, it was a good sign that Arizona has a young netminder ready to fill in, especially considering the injury history of both goaltenders. Hill finished the season with 2.76 GAA and a .901 save percentage in 13 appearances and will need to be re-signed to continue his development and he could eventually replace Kuemper once his contract runs out after the 2019-20 season.

Key Unrestricted Free Agents: F Richard Panik – The Coyotes picked up Panik back in 2018 in hopes of adding a 20-goal scorer to their middle lines after he posted a 22-goal campaign with Chicago during the 2016-17 season. While Panik showed some flashes of offense, he has scored just 14 goals per season over the last two years. His ice time has also increased this year as he averaged a career-high 16:37. However, assuming general manager John Chayka continues to turn over his roster, Panik could be the odd man out and be a target for many teams looking for bottom-six production and a contract that goes with it. That doesn’t rule out a reunion, but when it comes to unrestricted free agents, the team doesn’t have too much to worry about.

Projected Cap Space: The Coyotes have more than $74MM tied up in 20 layers for next season, per CapFriendly.  Even with the projected bump in the Upper Limit, the Coyotes don’t have as much room to maneuver as in previous seasons. The team does have two years remaining on the Marion Hossa contract, which should give the team an extra $5.275MM once the team places him on LTIR at the start of the regular season in October, but the team now has bigger contracts than in years past after new extensions for Nick Schmaltz, Oliver Ekman-Larsson, Christian Dvorak, Niklas Hjalmarsson and Jacob Chychrun kick in this summer. Many assume the team will try to get involved in the Phil Kessel discussions as Arizona is a team that Kessel has indicated he’d like to go to, but then Chayka may have to manipulate the cap again to free up some space. Regardless, don’t be surprised if Chayka doesn’t make several more moves to shake up this team.