Considering the amount of veterans this team has, its surprising to see so many young players on the team as the Blues have done a nice job over the years of drafting quality players and developing them. Perhaps the most interesting of the lot will be Thomas, the team’s first-round pick in the 2017 draft. The 19-year-old dominated his junior league last season and many people believe he has a great shot at winning a roster spot this season as the team feels that there is no reason to return him back to his junior team. The team also has Kyrou, another top-rated prospect, but the team is more likely to send him to their AHL affiliate as he no longer needs to be returned to juniors. Regardless, however, if he fares well, he could see time with the Blues throughout the season.

Dunn has been a major revelation after surprising a few when he made the Blues out of training camp last season. He had a remarkable season, playing solid defense, producing five goals and 21 points and eventually quarterbacked the team’s top power play line. The team may also start seeing more of Husso, who is their goalie of the future, but needs more seasoning in the AHL. The 23-year-old had a .922 save percentage in 38 games in the AHL last year.

Other interesting prospects include Sanford, Barbashev and Blais who will have to fight for playing time, but all have the skill to work their way in at some point this season. 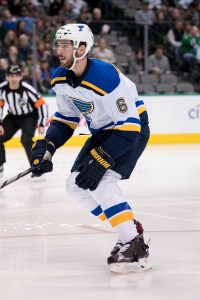 The team should find themselves with extra money next season as the contracts of several defenseman expire, including Bouwmeester’s $5.4MM deal and Gunnarsson’s $2.9MM. Both have been excellent players in the past, but the with emergence of younger defensemen, the team is likely to move on from them or look for them to return at a significantly reduced rate. Some of that available money could end up in the hands of Edmundson who has done an excellent job of replacing Bouwmeester on the top defensive line.

The team also will be keeping a close eye on Fabbri, who has spent much of last year training and conditioning his knee for the upcoming season after undergoing two procedures on his knee. If the scoring winger can stay healthy, he could provide the Blues with an extra dose of offense they weren’t counting on. The team also has high hopes for Maroon, who opted to take less to return home to St. Louis this year. There are rumors that the team will reward him next season for being willing to accept much less than he was worth.

Johnson has been working on one-year deals for a little while, but the veteran backup could be needed if Allen falters in goal this year. While his numbers in Buffalo were horrible, many believe that he could easily bounce back considering the quality defense he’ll have in front of him in St. Louis.

The team has been thrilled with the play of Pietrangelo, who continues to improve offensively as the team’s No. 1 defender. He is used that way too as he averaged 25:44 of ice time last year, ranking him sixth in the NHL. The 28-year-old has now posted double-digit goals for the second straight years and posted a career-high 54 points this season. He’s finally receiving that respect around the league as he was voted to the all-star game as well as got some consideration for the Norris Trophy this past season.

Schenn is another key player that the team got a tremendous amount of production from this year after acquiring him from Philadelphia in the offseason. Schenn, who likely will move to the second line this year, posted career-highs in goals (28) and points (70) and was a big hit in St. Louis.

Allen has been under a microscope after struggling during stretches of the past two seasons. The 28-year-old especially struggled last year, posting career-lows in goals against (2.75) and save percentage (.906). The team needs him to find himself and return to the form that he once had. If he fails, the chances of the Blues reaching the playoffs would definitely be in jeopardy. However, if he can prove to be both healthy mentally and physically, he could help vault the Blues much deeper in the playoffs. The team has a potential replacement in Husso down the road, so Allen is starting to run out of chances to prove his worth.

Schwartz was producing at an impressive rate before going down with a broken ankle last season which forced him to miss 20 games. However, he paired well with Schenn and will likely move to the second line along with him. However, despite missing 20 games, it’s obvious he would have had career highs in goals and points. He finished the season with 24 goals and 59 points, which are just shy of his career-highs. If the 26-year-old can keep that type of play up, the team should have a high-end second line. Steen, however, is heading in the other direction. With still three years left on his deal, the 34-year-old continues to see his offense fade as he finished last season with 15 goals and 31 points and could see himself heading for a bottom-six role.

The addition of Bozak will be an interesting one. The 32-year-old should provide the team’s third line with a high-impact center. While his numbers aren’t that impressive, he does set up his wingers fantastically well and should be a welcome veteran presence for the next few years. 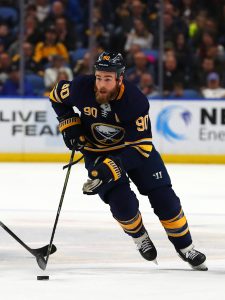 The team went out and paid a significant price to trade for the disgruntled O’Reilly, which now gives the team the No. 1 center that they need. His addition should hopefully help Tarasenko develop into that superstar that everyone believes that he can be. The hope the two (along with Maroon) should form one of the best first lines in the NHL. O’Reilly produced 24 goals and 61 points, but could also see his game elevated in the pairing with Tarasenko, who had a slight down season as he scored just 33 goals, which is below his usual averages. Both are still in their prime and should be anchoring that top line for years to come.

Parayko has really developed into an impressive defenseman. The 25-year-old continues to improve his offense, while providing impressive defense throughout. He still has a lot of room to grow into his 6-foot-6 frame, but the team has high hopes his development will continue. Perron also adds a key element to the team. The former Vegas Golden Knight posted a career-season with the expansion team and showed incredible passing skills there and could find himself working with Schenn and Schwartz on the team’s second line.

Considering all the team’s depth and veterans, the Blues aren’t that bad off when it comes to long-term contracts as they have few and those that have them are phenomenal players in their prime. The team should be in good depth both offensively and defensively as they have quite a bit of fire power, but also depth as the team is loaded with lots of young talent, many of which will be forced to play in the minors until the team needs them. If the team can continue to develop that youth along with the veterans, they should be an impressive team in a talented Central Division. The only worry is whether they can get Allen to play the way they need in goal.