Free agency is now less than a month away from opening up and there are quite a few prominent players set to hit the open market while many teams have key restricted free agents to re-sign. Here is a breakdown of Los Angeles’s free agent situation.

Key Restricted Free Agent: F Tobias Rieder – The Kings added the speedy winger back in February in the hopes that a change of scenery would rejuvenate him after he started to struggle with Arizona.  That didn’t happen as he wound up collecting just six points in 20 games while seeing his playing time dip to under 13 minutes per game. 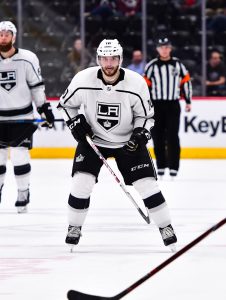 That all said, the 25-year-old has scored at least a dozen goals in each of his four full NHL seasons and has the versatility to play both wings while also being good enough to log time on the penalty kill.  He’s a useful depth player to have that can move up when injuries arise.

The big question here is whether the Kings have seen enough to give him a qualifying offer.  The back-loaded nature of his bridge deal means that his qualifying offer checks in at $2.45MM.  For a team that doesn’t have a lot of roster or salary cap flexibility (more on that later), non-tendering Rieder would give them a bit more flexibility to work with this summer.  He’s the lone NHL restricted free agent they have to deal with and a decision could come down to the wire before the tender deadline on June 25th.

Key Unrestricted Free Agents: F Torrey Mitchell – Another midseason acquisition, Mitchell was brought in to win faceoffs and kill penalties from the fourth line.  He wasn’t as successful at the dot as he had been in recent years but he took a regular turn on the penalty kill and chipped in with 11 points in 49 games.  He’s someone Los Angeles could look to bring back in a similar depth role although he’d need to take a pay cut from the $1.3MM salary he received in 2017-18.

D Christian Folin – Folin’s first season away from Minnesota was his best.  He set career highs in games played (65) and points (13) while logging 15:39 per game, an uptick over his time with the Wild.  He’s a depth defender who is best served in a sixth/seventh role but he’s still young enough (25) that teams will take a chance on him while it helps that he plays on the right side.  The Kings could choose to bring him back to play the same role but if they don’t, he should be able to land a one-way contract again this offseason.

Projected Cap Space: With 20 players under contract already for next season, the roster is pretty close to full.  Accordingly, the Kings have the most money committed for 2018-19 at just over $71MM, per CapFriendly.  A new deal for Rieder if they keep him would likely put them over $74MM and give them enough space to add a mid-tier free agent assuming the salary cap goes up a few million as expected.  If they non-tender him though, they may have enough to go after one of the more prominent UFAs (or go after an established top-six forward in a trade).  It will be a quiet offseason in Los Angeles but they should have at least one move in them.