The New York Rangers are selling. In not so many words, Glen Sather and Jeff Gorton reached out to their fans and told them that they were going to blow up the core of the team, selling off familiar faces and beloved teammates. Not only might that include franchise leaders like Ryan McDonagh, but expiring assets like Rick Nash and Michael Grabner. While the former may be getting more headlines, Grabner is not one to be overlooked. 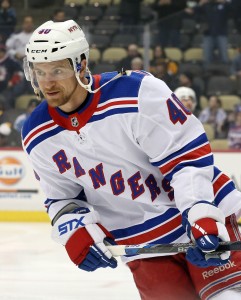 In September of 2015, Grabner was traded to the Toronto Maple Leafs in exchange for five minor league players, who have combined for a total of 11 NHL games since. Several of them are no longer playing hockey in North America. It was a dump of his $5MM salary, after three consecutive injury-filled seasons for the New York Islanders. For Toronto, nothing went right for Grabner as he scored just nine goals and 18 points in 80 games.

But then, the Rangers came calling and everything changed. Suddenly, Grabner exploded for 27 goals last season, all of them at either even-strength or short-handed. His speed and ability to counter-punch with devastating efficiency was a big part of the Rangers offense. This year has been much of the same.

Amazingly, despite getting essentially zero powerplay time all season Grabner already has 21 goals. That total easily leads the Rangers, and puts him among the elite players in the game in terms of goal production given his limited minutes. His 20 even-strength markers tie him for sixth in the league behind names like Nikita Kucherov, Alex Ovechkin, Auston Matthews, William Karlsson and Sean Couturier. He’s on pace for the second 30-goal season of his career, but only has five assists all year.

There are basically no teams in the league who have their eye on the playoffs and couldn’t use a player like Grabner. His ability to penalty kill and versatility to play with scoring or checking units means he can fit in anywhere. He comes with an extremely reasonable cap hit at $1.65MM and got some good playoff experience last season with the Rangers (where he scored four goals in 12 games, again tying for the team lead).

The question will be who wants to pay the most for a player who isn’t as dynamic offensively as other rental wingers like Nash, or Evander Kane. Though he can certainly put the puck in the net, creating offense for his linemates has never been Grabner’s game.

One interesting destination could be Los Angeles, who have been desperate for scoring since Jeff Carter’s injury and could use another injection of speed into the lineup. Another is Tampa Bay, who have room for another winger and could really use some help on the penalty kill. The Lightning lost arguably their best defensive forward in Ondrej Palat for a few more weeks, and could easily slide Grabner into their salary structure.

A trade is all but certain for Grabner, as one of the expiring assets the Rangers will use to kick their rebuild into gear. If someone is going to offer a first-round pick, as some have suggested, he’d likely be on his way out in the next few days. Otherwise, the Rangers might be wise to hold onto him until some of the other shoes have dropped and teams feel like their rivals are getting the better of them.

The eventual return may be far less, depending on where the market sets the price for rentals, but it’s clear that Grabner will have value around the league. If there is a team who feels that he can make a big difference on their team in those key situations, there just could be a small bidding war for his services.