8:35pm: The Pittsburgh Penguins’ release fills in the remaining blanks as to the Vegas Golden Knights’ role in the deal. The Pens confirmed that they acquired Brassard, Dunn, and Ottawa’s 2018 third-rounder, but have also added forward prospect Tobias Lindberg from the Golden Knights. In exchange, Vegas received Reaves and the Penguins’ 2018 fourth-round pick, as previously confirmed, and the Knights retained 40% of Brassard’s salary, or $2MM against the cap this season and next . So, in exchange for the added cap space this year and Lindberg, a 22-year-old winger being traded for the third time in his pro career, the Penguins gave Vegas an NHL-caliber checking forward and a draft pick. It is highly speculated that Ottawa, who retained no salary in the deal, will quickly flip Cole to a contender, while it remains possible that Vegas could flip Reaves. The Knights could also hold on to the veteran energy-liner with Pierre-Edouard Bellemare and William Carrier currently sidelined .

8:20pm: The Ottawa Senators have now officially announced the trade, with even more twists. The Senators have indeed acquired Cole, Gustavsson, and the Penguins 2018 first-round pick in the trade. They will also receive a 2019 third-round pick from Pittsburgh. Additionally, Brassard is joined by young forward Vincent Dunn and a 2018 third-round pick on their way to the Penguins. Essentially, the teams added a swap of third-rounders into the mix, as well as Dunn, a 22-year-old ECHL veteran.

8:00pm: The trade has been re-worked and approved by the league, with some interesting twists. TSN’s Bob McKenzie was the first to report that the deal had been completed, with Brassard headed to Pittsburgh. Sportsnet’s Elliotte Friedman then added that Cole would still be going to Ottawa, rather than Vegas, as some had speculated. However, Vegas will be getting a return in the form of Penguins enforcer Ryan Reaves, TSN’s Pierre LeBrun announced. The Penguins acquired Reaves from the St. Louis Blues for a first-round pick and Oskar Sundqvist in last June’s draft, but have moved on from the energy line forward less than a year later. McKenzie adds that Pittsburgh also sent a fourth-round pick to the Golden Knights. More details about the three-team deal are still to come.

4:58pm: Hold everything, as Nick Kypreos of Sportsnet is now reporting that the deal has been rejected by the NHL unless it is restructured. The league would not allow Brassard to pass through Vegas simply for the purpose of retaining salary. This decision is understandable, as it would set a dangerous precedent for further cap space exploitation if allowed. Dreger and Elliotte Friedman of Sportsnet both report that the three teams are working to come up with something that will be approved.

4:05pm: Derick Brassard appears to be on his way to Pittsburgh, as Bruce Garrioch of Postmedia reports that the Ottawa Senators are closing in on a deal that would send the veteran center to the Penguins. Darren Dreger of TSN reports that the Senators will receive a 2018 first-round pick, goaltender Filip Gustavsson, and defenseman Ian Cole. There also is expected to be some level of salary retention of Brassard’s contract, and could be another part of the move still to come. Bob McKenzie of TSN tweets that the deal is very complicated, and likely includes the Vegas Golden Knights.

Brassard was arguably the top center option available on the trade market this weekend, and had as many as seven teams interested in acquiring his services. Pittsburgh finally won the bidding, and will part with a solid package of assets. 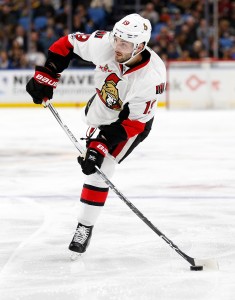 The Senators were insisting on a first-round pick in any Brassard deal, but they’ll get one that falls near the end of the round. The Penguins are pushing the Washington Capitals for first place in the Metropolitan Division, and are doing everything in their power to try and three-peat as Stanley Cup Champions.

Gustavsson may be the jewel of the package, as he has shown really high-end potential since being selected 55th-overall in 2016. Playing in the SHL, the 19-year old goaltender has a .917 save percentage and excelled at the World Juniors winning a silver medal and being named the tournament’s best goaltender. Still, Gustavsson is very young and could still be years away from making a real impact at the NHL level.

Cole will likely be flipped in the next few days, as he’s scheduled to become an unrestricted free agent in the summer. The 28-year old defenseman was included to even out salaries, but probably won’t have a very long Senators career unless the team approaches him with an extension offer. Cole was rumored to be on the block for almost the entire season, and could net the Senators another draft pick or prospect for their rebuild.

In adding Brassard, the Penguins once again become a favorite in the Eastern Conference. Though he isn’t expected to carry the load offensively, he now gives them their familiar three-line attack with Sidney Crosby, Evgeni Malkin and Phil Kessel all able to drive a group. Almost no one in the NHL can match that kind of depth down the middle, especially if Brassard can find another gear playing against weaker competition. Already with 18 goals and 38 points through 58 games, he’ll give them another option on the powerplay as well.

Brassard actually has 78 games of playoff experience, mostly going back to his days with the New York Rangers. In those appearances he’s recorded 22 goals and 55 points, an impressive total that Penguins GM Jim Rutherford no doubt took into account. He’s also been extremely durable the last few seasons, playing in at least 80 games for four straight years coming into 2017-18.

In all, the trade seems like a good fit for both clubs, even if it is a bit surprising. Ottawa was playing Pittsburgh in the seventh game of the Conference Finals less than a year ago, and is now selling off assets in order to reload on talent. This could be just the first of several moves this weekend.