The Oilers have made a move to bolster their backup goaltender position, announcing that they have acquired Al Montoya from the Canadiens in exchange for a conditional fourth-round pick in 2018.  Sportsnet’s Chris Johnston notes (Twitter link) that Montoya must play in seven games with Edmonton in the regular season for Montreal to receive the fourth-rounder.  If he does not, the Oilers will send a 2018 fifth-rounder instead. 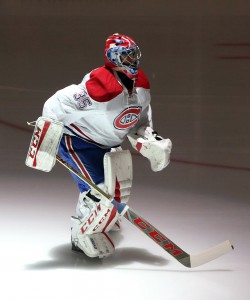 It’s not surprising that Edmonton was looking to upgrade their backup goalie as Laurent Brossoit has struggled in that role so far this season.  In 13 appearances, he has a 3.22 GAA and a .886 SV%, numbers that are below-average for a number two netminder.  It appears likely that he will be heading for waivers once Montoya gets the green light to be activated off injured reserve.

Montoya has seen very limited action this season, making just four appearances before suffering a concussion in early November.  While his numbers this year are worse than Brossoit (a 3.77 GAA with a .863 SV%), the veteran has a much longer track record of being a capable second option.  In 159 career regular season games between the Coyotes, Islanders, Jets, Panthers, and Canadiens, he has a 65-47-22 record with a 2.63 GAA along with a .908 SV% and seven shutouts.

The 32-year-old carries a cap hit of $1.0625MM and is signed through 2018-19 so Edmonton is making a commitment to Montoya for more than just the second half of this season.  While they have more than enough cap space to take on his deal this year, this trade now puts them with 13 players signed for next year with a combined cap charge of nearly $61MM.

As for Montreal, the trade means that the Canadiens will likely stick with Antti Niemi, who was acquired via waivers while Montoya was injured, as their backup for the time being while opening up a spot for Charlie Lindgren, who impressed in an early-season stint, to take over the backup job next season.