According to Arthur Staple of Newsday, the Islanders have received some bad news after their game last night. Ryan Strome has suffered a broken wrist and will be out for the rest of the season, if not the whole playoffs. Head coach Doug Weight had said last night that he would be out “this weekend and probably longer.” 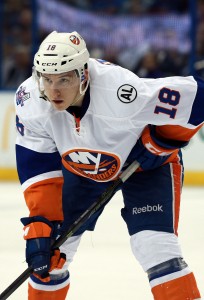 Strome injured the wrist on a hit from Brady Skjei in the second period, on a play that didn’t look all that dangerous. The much maligned forward had been playing better of late, though was still in the midst of another disappointing season. His 13 goals and 30 points will be the season totals, still not realizing the full potential he showed in his sophomore season. That year, he had 50 points while playing as one of the Islanders’ best defensive forwards but has taken a step back in his development.

The Islanders would have to go on quite a deep playoff run to see him back in uniform this year, which seems like a long-shot given their current situation. Sitting two points back of the Boston Bruins for the final spot, the second wildcard team will have to go through whoever comes out on top of the Metropolitan Division in the first round before playing the winner of the other two. It’s a tough route for any team, let alone one losing a young forward like Strome.

In his place, Staple assumes that Shane Prince or Alan Quine will be inserted. While both are established enough to not miss a beat, it would be interesting to see the Islanders reach down to the minors and recall Michael Dal Colle from Bridgeport at some point. The former fifth-overall pick has yet to make his NHL debut, but has had a successful (if unspectacular) rookie season in professional hockey with 35 points in 63 games. He would definitely give the lineup another shot of youth alongside Josh Ho-Sang and Anthony Beauvillier, something they might thrive off of this late in the year.