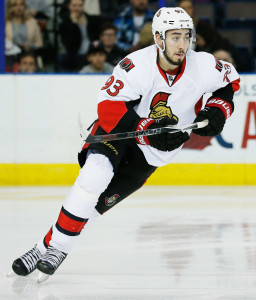 The Ottawa Senators announced that they have acquired center Derick Brassard and a 7th round pick in 2018 from the New York Rangers in exchange for center Mika Zibanejad and a 2nd rounder in 2018.

Last season, Brassard played in 80 games with the Rangers, scoring a career high 27 goals and adding 31 assists while averaging a career best 17:53 per game.  His 58 points ranked second on the team to winger Mats Zuccarello.  He also added four points (1-3-4) in five postseason contests.

The 28 year old Brassard was originally the 6th overall pick in the 2006 NHL Entry Draft by Columbus and was dealt to New York in 2013 as part of a package for Marian Gaborik.  He has played in a total of 563 career NHL games between the Blue Jackets and Rangers, scoring 127 goals and 216 assists.

As for Zibanejad, he departs the only NHL organization he has ever known after being selected sixth overall back in the 2011 draft.  Last season, he posted career highs across the board for the third straight season, recording 21 goals and 31 assists in 81 games.  In 281 career contests with the Sens, he has 64 goals and 87 assists.

The deal represents a shake up for both teams’ top six forward units.  In Brassard, the Senators acquire a consistent point producer as he has hit 45 points or more in each of the last three seasons and he is also someone who can play a top line role.  Meanwhile with Zibanejad, the Rangers add a considerably younger but not as proven top six forward that also plays more of an all-around game.

TVA Sports’ Renaud Lavoie adds that this deal had been discussed for several weeks but that a $2MM bonus that Brassard received on July 15th needed to be paid by the Rangers for the Sens to do the deal.

Brassard has three years remaining on his contract with a cap hit of $5MM.  However, his salary drops to $3.5MM in each of the final two seasons (while he is only owed $3MM in 2016-17 after the bonus payment) which is important for a budget-conscious Ottawa team.  As for Zibanejad, he has one year left on his bridge deal that he signed last offseason with a cap hit of $2.625MM.  He will be owed a qualifying offer of $3.25MM next summer.