For the past four years, all of the revenue generated by this website came from banner ads. Though ad rates had been dropping prior to 2020, we’ve also seen an increase in traffic to make up for it. Free websites supported only by advertising seemed to be a thing of the past, but the model was working well enough for us.

Then COVID-19 hit, reducing traffic and ad rates significantly at Pro Hockey Rumors. In April, I wrote a post explaining our situation. I was heartened by the response in the comments. Many longtime readers urged me to create a way to support the websites directly.

Given the devastation of COVID-19, the status of a hockey website is not high on anyone’s priority list. We’ll continue covering NHL free agency, draft, and trade news with the same devotion we’ve had over the four six years. The free, ad-supported Pro Hockey Rumors remains unchanged. But for those regular readers who have the means and desire to support Pro Hockey Rumors directly, we’ve created Trade Rumors Front Office.

The launch of Trade Rumors Front Office is a big moment for us. Please consider subscribing!

As Pro Hockey Rumors celebrates its four-year anniversary, we’re looking to add to the writing staff!  In particular, we’re seeking someone with strong daytime availability Monday through Friday.  The position pays hourly.  The criteria:

The NHL playoff picture is coming into focus, and teams are fighting for the last spots and top seeds. Who will lock down their division? Who will capture a wild card berth? It’s all decided in the last month of the season!

Stream the biggest games of the regular season on ESPN+. That’s over 40 games in March, including In The Crease with Linda Cohn and Barry Melrose, plus live sports like UFC, MLS, MLB and more for only $4.99 a month or $49.99 a year. 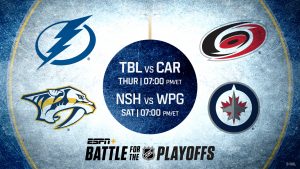 Last June, we launched Pro Hockey Rumors to cover all of the NHL transaction-related news, joining MLB Trade Rumors, Hoops Rumors, and Pro Football Rumors in our network.  PHR has grown rapidly since then and we’re looking to bring aboard multiple new writers with strong weekend and evening availability.  The positions pay hourly.  The criteria:

The Trade Rumors Network of websites goes well beyond Pro Hockey Rumors.  Please check out our other sites:

Pro Hockey Rumors delivers the latest news on NHL trades and free agency, with new material 365 days a year.  Run by a team of seven lifelong hockey fanatics, Pro Hockey Rumors is based on the model of our other successful sites: MLB Trade Rumors, Hoops Rumors, and Pro Football Rumors.  We aim to differentiate Pro Hockey Rumors from other hockey rumors sites by focusing equally on four factors: