As American Thanksgiving and the holiday season are upon us, PHR is taking a look at what teams are thankful for in 2022-23. There also might be a few things your team would like down the road. We’ll examine what’s gone well in the early going and what could improve as the season rolls on for the Columbus Blue Jackets.

Who are the Blue Jackets thankful for?

Don’t know who Ville Siren is? That’s kind of the point. The Blue Jackets director of amateur scouting isn’t the one that has to face the cameras every day, but he’s arguably just as important to the organization as general manager Jarmo Kekalainen. There isn’t a ton to be thankful for in Columbus right now, as injuries have absolutely ravaged the NHL roster and it looks like they won’t be competing for the playoffs this year.

But with Siren in place, fans can be pretty confident that the team will turn things around eventually, thanks to their strong history in the draft.

When he joined the organization in the summer of 2013, the Blue Jackets had just made four selections in the top 50 picks. Those players ended up being Alexander Wennberg, Kerby Rychel, Marko Dano, and Dillon Heatherington. They did get Oliver Bjorkstrand that year, but otherwise whiffed on most of their picks. Moving forward, Siren has repeatedly plucked NHL talents out of the draft even in rather late positions.

Elvis Merzlikins, Vladislav Gavrikov, Markus Nutivaara, Andrew Peeke, Emil Bemstrom, Daniil Tarasov, and Alexandre Texier were all picked outside of the first round, while Zach Werenski, Pierre-Luc Dubois, Yegor Chinakhov, Cole Sillinger, and Kent Johnson all look like first-round hits. No scouting department is going to hit a home run with every selection but more often than not, Siren’s group seems to have a good sense of where the value lies. 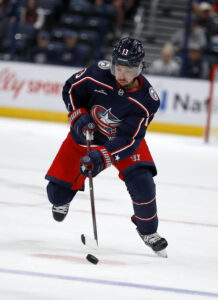 What are the Blue Jackets thankful for?

A changing narrative around the market.

For years, there has been a narrative that players would never choose to play in Columbus. Stars wanted out, free agents wouldn’t sign, and the team would never have real game-changing talent. That is beginning to shift, thanks to the work that Kekalainen has done. Johnny Gaudreau shocked the hockey world by signing a massive contract with the Blue Jackets, Patrik Laine settled down and inked a multi-year extension, and Werenski committed to the program just as another defenseman was looking for a way out.

The Blue Jackets might not be competitive this season but the program that Kekalainen (and John Davidson) have built at least now allows them to stand shoulder-to-shoulder with some bigger markets when it comes to acquiring and retaining star-level talent.

A little bit of health (next season).

Navigate to the Blue Jackets’ CapFriendly page and you will see an injured reserve list that could be a pretty impressive roster on its own. Laine, Werenski, Merzlikins, Jakub Voracek, Jake Bean, Justin Danforth, Nick Blankenburg, and Adam Boqvist are all out of the lineup, meaning the team doesn’t really have a chance to keep pace in the Metropolitan Division

It’s probably not going to turn around this year, but when the Blue Jackets come back in September 2023, they’ll have a roster loaded with young talent that could be ready to make some noise. If you’re hoping for consistency and health, it’s for the 2023-24 season that you want it – after they get a crack at the Connor Bedard sweepstakes.

What should be on the Blue Jackets’ holiday wish list?

There’s a chance here for the Blue Jackets to pick multiple times in three straight first rounds. Adding that kind of talent to an organization in such a short period can create an avalanche (pun intended) of success, with impact players all over the roster. Remember that even outside of Johnson and Sillinger, who are already staples on the NHL roster, Columbus has David Jiricek, Denton Mateychuk, and Corson Ceulemans in the system as first-round talents picked in the last two years.

They have the assets to do it, too. Gustav Nyquist and Gavrikov are both going to be coveted at the trade deadline, and Jack Roslovic might even be available. When teams are tossing around draft picks for marginal improvements for a playoff run, the Blue Jackets will be waiting to add another future asset to the pile.