As Thanksgiving and the holiday season approaches, PHR will be taking a look at what teams are thankful for in 2022-23. There also might be a few things your team would like down the road. We’ll examine what’s gone well in the early going and what could improve as the season rolls on for the Arizona Coyotes.

Who are the Coyotes thankful for?

There was a time in which Clayton Keller looked more like a quality top-six player than a truly elite talent. Like someone on the bubble of first-line talent level, but without the production to back up that assessment. Those days are over. Despite suffering a gruesome lower-body injury that prematurely ended his season last year, Clayton Keller has picked up right where he left off and is cementing himself as a true face-of-the-franchise offensive talent.

Last season was a breakout of sorts for Keller. While he scored 65 points in 2017-18 as a rookie, he struggled to reach those heights in subsequent years, finishing in the 40-point range for the next two seasons and then scoring at a 51-point pace in the shortened 2020-21 season. In 2021-22, Keller reached another dimension of production, scoring 63 points, leading the Coyotes in point production despite playing in just 67 games. 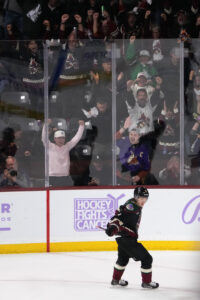 This year, Keller has 17 points in 15 games and looks every bit like the elite offensive play driver he was last year. Still just 24 years old, Keller has put himself in a position to be the centerpiece of the Coyotes’ forward corps for many years to come.

Back in 2019, Keller signed an eight-year, $7.15MM AAV extension. While it was a deal that some at the time viewed as an overpayment, it now looks to be an extremely shrewd investment, seeing as the going rate for point-per-game offensive play drivers is $8MM AAV or higher.

For a franchise that has dealt with so much uncertainty over the past few years, having Keller productive and locked into a team-friendly long-term extension is the sort of thing any Arizona fan should be extremely thankful for.

What are the Coyotes thankful for?

As was mentioned in the first edition of our Big Hype Prospects series, the 2023 draft class at the moment looks absolutely loaded with quality talent. That sentiment is especially true at the top of the draft, since there are four players whose current prospect profiles compare quite favorably to the first-overall picks from the 2021 and 2022 drafts.

Connor Bedard needs no introduction for most hockey fans, while University of Michigan forward Adam Fantilli is authoring the most productive freshman NCAA season since Jack Eichel tore Hockey East apart as a Boston University Terrier. Russian forward Matvei Michkov shattered junior scoring records in his home country and is currently scoring at an above-point-per-game rate in the VHL. And then there’s Swedish center Leo Carlsson who has burst onto the scene with 12 points in 17 games for Orebro in the SHL.

The Coyotes haven’t been among the NHL’s worst teams yet this season, but they are widely expected to find their way to the bottom of the NHL’s standings by the time the season runs its course.

If that ends up being the case, and the Coyotes end up finishing last in the NHL standings, they will not only have the highest odds of landing the draft’s top selection, (thereby securing themselves their choice from this top tier of prospects) they’ll also have guaranteed themselves a top-three selection, meaning they will, at worst, potentially have their choice of Michkov or Carlsson.

Since the Coyotes are a franchise that is looking to build for the long term and add as many talented prospects as possible, Coyotes fans should be extremely thankful that the crop of 2023 draft-eligible prospects looks to be so talented at this early stage.

The Coyotes’ arena situation has gotten significant media attention in recent years, and that attention hasn’t always been positive. At the moment, the Coyotes are currently sharing Mullett Arena with the Arizona State University Sun Devils hockey program.

While some might point out that Mullett Arena is a brand-new, state-of-the-art facility that provides a more intimate experience than any other NHL arena, it’s important to remember that the experience is only “intimate” because the arena’s capacity hovers around the 5,000 mark.

Mullett Arena is definitely a unique venue that provides some interesting opportunities for the team to pursue, but it’s unfit to be the Coyotes’ long-term home. The team is seeking a long-term arena solution in Tempe, although the likelihood of the team’s proposal becoming reality is unclear. The issue could potentially be decided via a referendum, which is hardly the sort of slam-dunk green light the franchise is definitely hoping for.

While the future on the ice is looking bright for the Coyotes, Arizona fans would have a lot more to be thankful for if the team’s off-ice future was more settled and concrete.

What should be on the Coyotes’ holiday wish list?

One of the single largest advantages Arizona has over other teams is their considerable war chest of cap space. While most NHL teams are counting their pennies in order to remain cap compliant, the Coyotes, per CapFriendly’s calculations, are on pace to have over $74MM in cap space accumulated by the trade deadline.

As a result, the Coyotes will have the bandwidth under the salary cap to act as a “broker” for any potential trades between cap-strapped teams. What this means is that the Coyotes will be able to act as a financial facilitator for other teams’ trades, in exchange for draft pick compensation. They have the ability to retain salary on two players in advance of this year’s trade deadline and may be able to charge higher prices for that retention than in prior years thanks to the leaguewide lack of cap space.