Never a bad day when you can sign the CHL scoring leader. The Columbus Blue Jackets have inked Jordan Dumais to a three-year, entry-level contract. The young forward will stay with the Halifax Mooseheads, where he is dominating in his post-draft year. 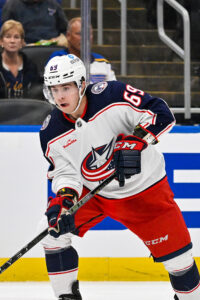 While his size – Dumais stands just 5’9″ – may have kept him from being a top pick in the draft, it’s hard to play much better than the diminutive winger. If he’s going to make it in the NHL, what better organization to do it with than the one that just signed Johnny Gaudreau.

The contract will be registered right away, but Dumais won’t burn the first season this year. It will slide, and could even slide again next season given he won’t turn 19 until April. He joins a loaded prospect group for the Blue Jackets that could quickly lead to some long-term success in Columbus.