There is a late entrant to the coaching shuffle around the NHL as the Sharks have announced that head coach Bob Boughner along with assistant coaches John Madden and John MacLean plus video coach Dan Darrow have all been relieved of their duties.  Interim GM Joe Will released the following statement:

As we progress through our search for the next general manager of the Sharks following 19 seasons under Doug Wilson’s leadership, it has become apparent that the organization is in the process of an evolution. The bottom line is we have missed the playoffs for the past three seasons, which isn’t acceptable to our owner, our organization, or to our fans. As part of this evolution and evaluation, we felt it was in the best interest of the club to allow the next Sharks general manager to have full autonomy related to the make-up of the on-ice coaching staff moving ahead. 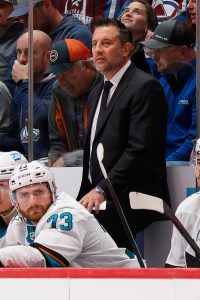 Boughner took over as San Jose’s head coach back in December of 2019 on an interim basis when he took over for Peter DeBoer with the team removing the interim tag at the end of the season, handing him a three-year deal in the process.  That contract, worth $1.5MM per season, had one year remaining, and with so few head coaching openings out there, it’s unlikely he’ll be running an NHL bench when training camp comes around.

As Will noted in his statement, the Sharks missed the playoffs in each of the three seasons that Boughner was behind the bench with the team ultimately compiling a 67-85-23 record during his tenure.  Their points percentage improved in each of the last two seasons but San Jose finished sixth in the Pacific Division this past season with a points percentage of just .470.  For his head coaching career which included a two-year stint in Florida, Boughner’s record is 147-147-35.

What’s particularly noteworthy here is that the Sharks haven’t completed their search for a new general manager yet, at least officially.  Will is the one that wound up making the change but there is an expectation that a new GM will be in place soon.  TSN’s Darren Dreger notes (Twitter link) that former Canadiens assistant GM Scott Mellanby is a name that has surfaced this week as one to watch on that front while ESPN’s Greg Wyshynski suggests Mike Grier and Ray Whitney are in the mix as well.  With the draft now less than a week away and free agency beginning less than a week later, their new GM was already going to have plenty on his plate in terms of roster building to try to get this team back into the postseason and draft planning.  Now, there will be a coaching search to complete as well.

Sportsnet’s Elliotte Friedman was the first to report that Boughner had been let go.  Pierre LeBrun of TSN and The Athletic was the first to add that Madden, MacLean, and Darrow were also out.