The Colorado Avalanche are getting closer and closer to unrestricted free agency without any resolution to their two biggest UFA negotiations. While most assumed captain Gabriel Landeskog would be re-signed without issue, things haven’t progressed as quickly as the veteran forward was hoping. In fact, Landeskog expressed some frustration when speaking with Peter Baugh of The Athletic:

I can’t help but be honest with you that I’m a little bit disappointed that it’s gotten this far and it’s had to come to this point.

We’ll see what happens. I’m still hopeful that we can agree on something and come to terms, but if it was up to me, I would have liked it to be done eight months ago, 10 months ago. 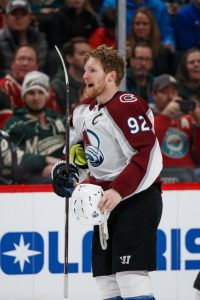 It’s difficult to imagine Landeskog in any sweater other than Colorado’s, given he has been a fixture there for so long. Selected second overall in 2011, the Swedish forward immediately jumped into the NHL to win the Calder Trophy with 52 points in 82 games. By the start of year two, he was made the then-youngest captain in NHL history. It’s been his team ever since, even as other supremely talented players have come and gone, even as Nathan MacKinnon assumed the mantle as the best player on the team; it was still Landeskog who wore the “C”.

Last night, Darren Dreger of TSN reported that Landeskog and the Avalanche are “not even close” in their negotiations, which raises some eyebrows given how close free agency is. In just two weeks teams will be able to call up Landeskog and offer him a huge long-term contract. The market for his services will be large, as it’s not often a player that combines first-line offensive production with physicality and leadership hits the market at the age of 28.  With 52 points in 54 games this season, he recorded his eighth season of at least 20 goals.

There is still time for the Avalanche to work things out with their captain, but given the fact that they also need to sign Vezina finalist Philipp Grubauer and restricted free agent Cale Makar, there might not be enough money to go around. The team currently has more than $25MM in cap space, but that will shrink considerably after a deal is completed with Makar and the Avalanche still have MacKinnon’s free agency to think about. The 25-year-old center will hit the open market after the 2022-23 season, likely deserving to be paid among the highest earners in the entire NHL. Signing Landeskog and Grubauer to long-term deals would certainly complicate things going forward, but watching your captain walk out the door in the prime of his career is certainly not an optimal scenario.