Free agency is now just a few days away and many teams are already looking ahead to when it opens up.  There will be several prominent players set to hit the open market in late July while many teams have key restricted free agents to re-sign as well. The Lightning have cleared a little bit of money through expansion, but still don’t have much to retain their pending free agents. 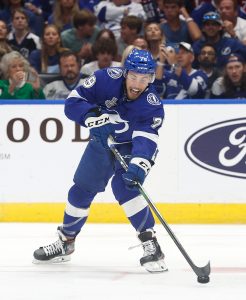 F Ross Colton – At the bottom of every Stanley Cup roster, there are always a few homegrown players that provide depth for a bargain bin cost. The Lightning have proven their development system can create NHL players out of almost anyone, and they did it again for fourth-round pick Ross Colton. The 24-year-old forward had 13 goals in 53 combined games, but none bigger than the one on July 7, tapping home a David Savard pass to put the Lightning ahead of the Montreal Canadiens. It would end up being the only goal they needed, meaning whatever happens from here, Colton has a Cup-winning goal on his resume. As an arbitration-eligible restricted free agent he may deserve a slight raise, but the Lightning simply don’t have the budget for one. It will be interesting to see if they can fit him in for really anything more than the $750K league minimum at this point.

D Cal Foote – Many were surprised last week when the Seattle Kraken decided to take Yanni Gourde in expansion instead of Foote. The 22-year-old defenseman was the 14th overall pick in 2017 and made his NHL debut this year, playing 35 games during the regular season. After some deadline additions, he failed to suit up for any playoff games, but will be in the running for the third pairing again next season. In fact, with Savard and Luke Schenn both pending free agents, the Lightning have only five defensemen under contract for the 2021-22 campaign. Foote’s opportunity is right in front of him, by accepting a short-term, low-salary deal (even potentially his qualifying offer) he stands the best chance of being in the NHL lineup every day. 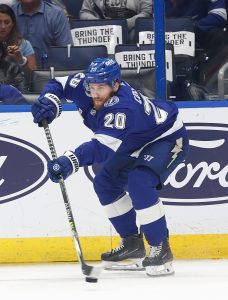 F Blake Coleman – The value of a quality bottom-sixer is already in full view when linemate Barclay Goodrow signed a six-year, $21.85MM deal with the New York Rangers, and many would say Coleman is the better player. In fact, he might prove to be more than just a bottom-six free agent this summer, he might be the bottom-six free agent. A swiss army knife that can basically play any position on any line, Coleman has scored 13, 22, 21 and 14 goals in his four full NHL seasons, this year’s total coming in just 55 games. He can play in a scoring role, he’s one of the best penalty killers in the league, can create offense by himself thanks to blazing speed, and is physical enough to excel in the playoffs. It’s hard to not see Coleman getting a huge contract in the open market, given the term and money committed to Goodrow already. Zach Hyman–who may have some better offensive numbers thanks to his role in Toronto–is a relatively good comparison for Coleman and is on the verge of signing a seven-year deal in Edmonton.

D David Savard – Acquired at the deadline in a savvy salary cap move, Savard was exactly what the Lightning expected down the stretch and through the playoffs. Steady, quiet, play from the right side, Savard is the kind of second-pairing rock that every team could use. He doesn’t post incredible possession statistics, scored just six points this season and turns 31 in October, but you can bet there is a multi-year deal waiting for Savard that will price him out of Tampa Bay’s range. The four-year, $16MM contract that Adam Larsson signed in Seattle should be a good comparable, though the Kraken had the added benefit of negotiating against no one but Edmonton. It certainly wouldn’t be surprising to see Savard pass that number or even secure a longer deal after playing a key role en route to a Stanley Cup championship.

At least the Lightning are technically under the cap again after losing Gourde and seeing so many others scheduled for free agency. The team has over $80.7MM committed to just 17 players, meaning there will be more moves coming at some point. At least one and maybe two of the team’s expensive forwards will need to go, while the restricted free agents will have to sign for cheap or pack their bags. That’s the cost of putting together a two-time Stanley Cup roster, and there are drastic changes coming in Tampa Bay before the start of next season.