The last expansion draft was one that the Anaheim Ducks likely want to forget. The team protected seven forwards and three defensemen in order to retain their core offense, but doing this left defenders Josh Manson and Sami Vatanen both exposed. While the Ducks tried to extend their competitive window, they dealt up-and-coming defenseman Shea Theodore to the Vegas Golden Knights in exchange for the team selecting Clayton Stoner instead of Manson or Vatanen. With their roster a shell of itself from four years ago, the Ducks likely won’t have nearly as much to worry about this time around.

Anaheim’s key decision surrounds which protection path they’d like to use. The team is rather well-equipped to use either the 7F/3D route as well as eight skaters, but either way, the team is probably losing a semi-important piece. Anaheim has a glutton of players who are young enough to have promise but too old to be considered prospects, meaning they’re all eligible for selection. 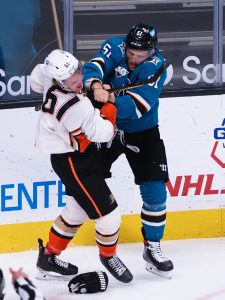 Up front, the Ducks have a group of five forwards in Troy Terry, Isac Lundestrom, Max Jones, Sam Steel, and Alexander Volkov who could all very well be at least reliable middle-six pieces down the line. On defense, there’s Haydn Fleury to be concerned about, who’s oozed potential since locking down a full-time NHL role and was acquired from the Carolina Hurricanes at the trade deadline.

Mix in the fact that Anaheim has two valuable trade chips that will almost certainly be protected. While not a part of their realistic long-term plans at this point, Rickard Rakell and Josh Manson are both prime trade candidates either this offseason or at next year’s trade deadline. Anaheim won’t want to lose out on the assets they could recoup for those two, and they’ll be protected in either scheme. Cam Fowler and Hampus Lindholm are stalwarts on the blueline and arguably their two best veteran skaters at this point and will be protected. It makes Anaheim’s decision rather clear: lose Fleury, or lose one out of the group of young forwards?

In all likelihood, Anaheim leans towards the latter option. Fleury showed legit NHL capability this year, especially down the stretch with the Ducks. He received top-four worthy ice-time, and his possession numbers supported that usage. Meanwhile, both Jones and Steel have struggled to find consistency at the NHL level, while Volkov figures as more of a depth piece anyways.

The Ducks won’t have any trouble hitting either of these thresholds no matter which protection path they choose. They’ve got a large amount of veteran skaters signed through next season, meaning that they’ll have no trouble exposing two forwards and one defenseman. While names like Adam Henrique or Kevin Shattenkirk seem like potential veteran building blocks for the Kraken, they’ll likely be able to find similar players elsewhere that come with a better value proposition. Anaheim should still walk out of the expansion draft with their main roster and core intact.