The Seattle Kraken went through an exhaustive process searching for their first head coach and have finally reached a decision. GM Ron Francis has announced that Dave Hakstol will be the organization’s first bench boss. In a statement, Francis explained his decision:

It is certainly is a job that interested a lot of candidates. There is a lot to like about the job with our ownership group setting the franchise for success. Dave is a hard-working guy. I liked his confidence during the interview process.

Dave has a strong understanding of the technical aspect of the game-how he wants his team to play in all three zones [on the ice]. He’s up for the challenge. 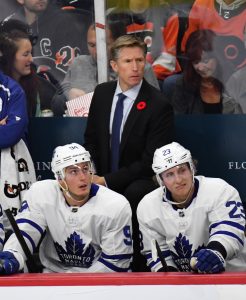 In Seattle, Hakstol is getting a second crack at a head coaching job after his first stint with the Philadelphia Flyers didn’t go all that well. He reached the playoffs in two of the three years that he completed, but was knocked out of the first round both times. Overall, he recorded a 134-101-42 record in parts of four seasons, while winning just four of 12 postseason contests.

For the past two seasons, he has been serving as an assistant coach with the Toronto Maple Leafs. Hakstol was responsible for the defense corps under both Mike Babcock and Sheldon Keefe, but will now take another step up to the head coaching position. Of course, his experience in that role isn’t limited to the seasons in Philadelphia. For a decade before coming to the NHL, Hakstol served as head coach of the University of North Dakota hockey program, leading powerhouse teams year after year. Before he joined the collegiate ranks he was the head coach of the USHL’s Sioux City Musketeers, another prestigious program at the amateur level.

He and Francis also have a history together from the 2019 IIHF World Championship, when Hakstol served as an assistant coach. Jason Botterill, who has joined Francis’ management team in Seattle was also part of that the leadership of that iteration of Team Canada. They’ll now get together for the new challenge of trying to take an expansion team to competitive status in short order. The Kraken have just one player–21-year-old Luke Henman–under contract.

This hiring leaves just two vacancies left in the NHL, those in Arizona and Buffalo. Rick Tocchet, who has seemingly received multiple interviews all over the league, has been passed over in Seattle, New York, and Columbus. Other names that were interviewed by Seattle include David Quinn, Rocky Thompson, Joe Sacco, Kevin Dineen, and Tony Granato, but it is Hakstol that has won the job.