The Buffalo Sabres are working the phones today, after suffering another loss to the Pittsburgh Penguins last night. Earlier in the day, Darren Dreger of TSN reported that Sabres GM Kevyn Adams has spoken to multiple teams about a Taylor Hall trade and now has dealt Eric Staal to the Montreal Canadiens. The Sabres will receive a 2021 third-round pick and a 2021 fifth-round pick for the veteran center. Buffalo will also retain $1.625MM (50%) of Staal’s salary and cap hit.

Adams received an up-close and personal look at the Sabres last night, moving behind the bench while interim head coach Don Granato isolated due to COVID protocols. What he saw was another listless effort from his squad, losing 4-0 to the Pittsburgh Penguins. The Sabres have now lost 16 straight games and have been shutout more times than they’ve won on the season. 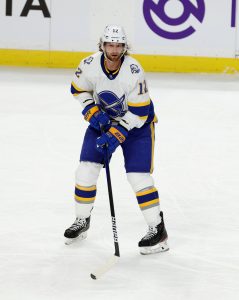 Like everyone else in Buffalo, Staal has been a shadow of his former self this season, recording just three goals and ten points in 32 games. The 36-year-old seemed to be battling father time quite admirably last season, scoring 19 goals and 47 points in just 66 games for the Minnesota Wild. That was the fourth strong season in a row for Staal in Minnesota, but an offseason trade brought him to Buffalo where he has struggled to get anything going. Chemistry never formed with Hall and at times, Staal has been used as a bottom-six player for the Sabres. His average ice time of 15:34 on the year is the lowest in his entire career and the results have followed.

Still, there’s no doubt he was an intriguing option to teams looking to bolster their center group for the stretch run. With a cap hit of just $3.25MM that expires at the end of the year, the financial commitment by an acquiring team would be small. Getting 1,272 regular season games of experience, not to mention a Stanley Cup championship (where he easily could have been awarded the Conn Smythe), would be an attractive option for any contender if the price is right.

For the Sabres, trading Staal is a no-brainer given how poorly the season has gone, and the recent decision by the Canadian government to reduce the quarantine for incoming players only increased their market. Staal does have a 10-team no-trade clause, but failing to get something in return for him would have been a serious misstep by the Buffalo front office.

Still, two mid-round picks for a player of Staal’s stature may speak to the state of the market right now. There aren’t many teams in the league that are looking to add money at the deadline and the Sabres obviously felt they weren’t going to get a better offer.

For the Canadiens, a third and a fifth is basically nothing, given how many other draft picks they already have. The team had hoarded 14 picks for the 2021 event, including three third and three fifths. It will be the Montreal picks that are going to Buffalo, not those they have acquired from other teams.

Even with the salary retention, Staal’s presence in Montreal squeezes the Canadiens right up against the cap ceiling. Pushing Paul Byron’s contract to the taxi squad will allow them to complete the move, given he is still eligible after clearing waivers, but it will be a tight dance for the rest of the year. Montreal GM Marc Bergevin had been repeatedly explaining that his cap situation would limit their deadline maneuvering, but it certainly didn’t stop them from landing one of the best rentals on the market.

Frank Seravalli of TSN was first to report that a deal with Montreal was close.