In perhaps the most shocking turn of events in an already bizarre offseason, Zdeno Chara will not be re-signing with the Boston Bruins. Chara confirmed his departure with a long, emotional message to Boston fans on his Instagram. Instead, the 43-year-old will be joining the fourth team of his decades-long career, signing a one-year contract with the Washington Capitals worth $795K. CapFriendly adds that the deal also includes an additional $730K in bonuses: $230K for ten games played, $250K if the Capitals make the playoffs, and $250K if the Capitals win the Stanley Cup. 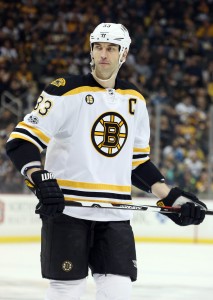 Chara will once again be the oldest player in the NHL, continuing his climb up the all-time games played leaderboard. The gigantic defenseman currently sits 15th with 1,553 regular season matches, trailing only Patrick Marleau and Joe Thornton among active players. That career, which started in 1997-98 with the New York Islanders, has also included nearly 200 playoff games and a Stanley Cup championship in 2011 with the Bruins.

Even though the writing seemed to be on the wall—including some recent comments from team president Cam Neely—Chara’s departure from Boston seems unthinkable at this point. Though he didn’t arrive in Boston until 2006, more than 500 games into his NHL career, he will be forever linked to the historic franchise as one of its greatest and most memorable players of all-time. Even now into his forties, Chara is still an exceptional penalty killer and can perform well in the defensive end, though his foot speed and offensive ability have greatly diminished.

In Washington, he would be able to provide leadership, physicality, and depth to a team that is looking to get back to the Stanley Cup Finals. The team is getting a lot closer to the end of their championship window and had already tried to bring a legend from a rival Eastern Conference team when they signed Henrik Lundqvist. Though Lundqvist won’t play for the Capitals this season, Washington will get to enjoy Chara on the ice every night.

Where he fits into the Capitals lineup is not clear, though the team’s defensive group was leaning to the right side as the season approached. John Carlson, Justin Schultz, Nick Jensen, and Trevor van Riemsdyk are all right-handed options, meaning Chara can perhaps give some balance to the left side alongside Brenden Dillon, Dmitry Orlov, and Jonas Siegenthaler.

Amazingly, in this unique season, Chara will actually be battling the Bruins on a regular basis. Washington and Boston are both part of the East Division and will play each other eight times in the 56-game season. Even if the veteran isn’t in the lineup every night for the Capitals, it seems likely he’ll be on the ice for each of those occasions.

Of course, not only is Chara a big leadership add for the Capitals, but he also comes at a very reasonable price. He’ll come in with a lower cap hit than both van Riemsdyk and Siegenthaler, meaning anything he brings to the table is a positive. His low price could even mean that Washington moves someone else out, though depth will be even more important this season.

For the Bruins meanwhile, they’ve now watched both Chara and Torey Krug leave in one offseason, dramatically changing the look of their defense. Sure, Charlie McAvoy, Brandon Carlo, and Matt Grzelcyk are very strong players that perhaps can handle even more responsibility, but Chara and Krug were the obvious leaders on Boston’s blueline. They’ll also now have to decide on a new captain, with Patrice Bergeron the obvious choice.

Washington wasn’t the only team after the veteran, once the chance of him leaving Boston became a reality. Frank Seravalli of TSN reports that two-thirds of the league checked in on Chara, while Eric Engels of Sportsnet tweets that he was told the Montreal Canadiens had an interest. That doesn’t come as much of a surprise, especially from teams that have had to try and deal with the 6’9″ legend.

Ken Campbell of The Hockey News was first to report that Chara was headed to Washington.