Once considered a team full of young players, the Coyotes have changed their image over the last few years and have only one young player on their team under a cheap entry-level deal with only a handful of entry-level players that are even close to joining the team. Hayton, however, could be ready for a breakout season after spending the season with the team last year. Unfortunately for Hayton, he would have benefitted the most with one year in the AHL, but wasn’t eligible to play there, so instead of returning him to his junior team, the Coyotes kept him around. He only appeared in 20 games (although he did miss time with a shoulder injury at the World Juniors), but showed enough potential that he should be an everyday player next season. A big year from the 2019 fifth-overall pick would be a boost to the team’s center position.

For a team that is looking to cut salary, the team has a lot of money coming off the books next year, suggesting the team could look drastically different in just one year. Some of those players could find themselves to be trade bait when the trade deadline comes around. The most interesting decision the team might have to make is what to do with Stepan, however. The 30-year-old was brought in from New York to stabilize their top line three years ago. He had four straight seasons of 50 or more points while with the Rangers and posted a 56-point season with the Coyotes in 2017-18. However, his production has taken a dive over the past two years as Stepan posted just 35 points (in 72 games) in 2018-19 and then dropped even further last year with just 28 points in 70 games. A team leader, the Coyotes have to hope that Stepan can return to form this season or the team could choose to move on from him. 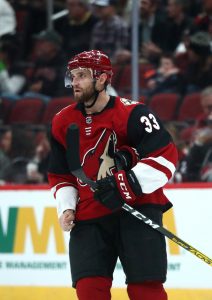 The team’s defense is loaded with several high-priced veteran blueliners and almost all of their contracts come up next season, including Goligoski, Hjalmarsson and Demers. Goligoski is 35, but is still playing major minutes for Arizona and could be a candidate to return at a slightly lesser deal. Hjalmarsson is 33, but has seen his game break down a bit as he has dealt with numerous injuries the last couple of years, including a fractured fibula that cost him 43 games last year. The 32-year-old Demers also averaged more than 20 minutes of ATOI per game. The team may keep one or two of those players, but likely will not keep all three.

The team will also want to evaluate the play of Raanta, who has showed flashes of dominance, but also has dealt with injuries and inconsistent play at times as well. Raanta did play well last season, posting a .921 save percentage in 33 games and gives the team several options in the net. Raanta could easily be re-signed to new deal or could be a trade candidate as well.

The team will also finally be free of Hossa’s $5.28MM contract the team took on years ago.

The team brought in Kessel to bring in the firepower that the team needed as goal scoring remains one of the team’s biggest weak points. Unfortunately, the first year with Kessel didn’t turn out to be the big acquisition that the team was hoping for. After an 28-goal, 82-point season in 2018-19, the 33-year-old saw quite a decline in his play with just 14 goals and 38 points in 70 games. That’s way below what they were hoping for and Arizona has to hope that Kessel can return to form this year in hopes of increasing his value if the team wants to move him at the trade deadline or next offseason when he has just one year left on his deal.

Kuemper has become the Coyotes’ top asset as the 30-year-old has been nothing short of dominant over the past two years and remains on a manageable contract. His name came up in trade speculation this offseason, but with so many free-agent goalies available, Arizona didn’t get the offers it was hoping for. That could change down the road. Yet at the same time, Kuemper might be worth keeping around down the road.

Currently, the Coyotes have only five players locked in two years from now with Ekman-Larsson leading the way. Unfortunately, the impressive defenseman saw his play take a step back last season and he saw his name running through the rumor mill all offseason and likely will be talked about again at the trade deadline, despite his no-movement clause and only his willingness to go to either Vancouver of Boston.

One thing the Coyotes did do was invest in their youth, which they did with Keller and Chychrun. Both players have showed plenty of promise, but neither has established themselves as elite players as of yet. However, the team is hoping that by signing them long-term, the contracts will look like solid, affordable deals down the road. Keller has not taken that step yet after a dominant rookie season where he scored 23 goals and 65 points in 2017-18. Those numbers dropped the following year (14 goals, 47 points). Keller’s numbers jumped a bit last year in 12 fewer games (17 goals, 44 points), but the team continues to wait on him to take that next step. Chychrun has dealt with minor injuries throughout his pro career, but posted a 12-goal campaign last year, suggested he was ready to assume a bigger role on the team’s offense.

Schmaltz was brought in for Dylan Strome a couple of years ago and despite a season-ending injury in 2018-19, he looked like a solid second-line center, who posted 45 points last year. However, the team hopes that he can take that next step and put up even more down the road, including upping his goal-scoring numbers which were only at 11 last season. Dvorak, on the other hand, scored 18 goals last season and slowly has improved every season with the team and is pushing Schmaltz for the second-line center duties.

In many ways, the Coyotes team has a feel that they are still a young team about to take that next step. However, when you look at the roster, the team added quite a few veterans over the last few years and many of those contracts are close to expiring. Only five players are locked up beyond the next two years, but the one missing key to the team is a lack of superstar talent. The team was obviously hoping that Taylor Hall might fill that void, but that didn’t happen, but is Clayton Keller their superstar? The other issue is that while this team is young, the team has not accumulated many draft picks (they already don’t have their 2021 first-rounder after the league took it away for violating the league’s combine testing policy), having traded many of them away and there isn’t a major group of kids ready to step in, which could really change the look of the Coyotes down the road too.