As things stand, the NHL is planning to have games resume at some point over the coming weeks.  Assuming the regular season continues (something the league remains hopeful of doing), there will be plenty of things to watch for over the stretch run.  Over the weeks ahead, PHR will examine the top stretch run storylines for each team.  We continue our look at the Pacific Division with Vancouver.

The Canucks have been a team trying to pry their way into the playoffs after several years of rebuilding. The team even took that next step, trading their first-round pick last offseason to Tampa Bay in exchange for goal-scoring forward J.T. Miller, a deal that paid off as he leads the team in scoring with 72 points and is tied for the team lead in goals with 27. The team has been in the playoff race all season, but might have some challenges in the months ahead.

The Canucks have 78 points at this point in the season and currently, based on points percentage, they would be the first wildcard team if the season ended today. That’s great news, but if the regular season resumes and is based on points, the Canucks would be out of the playoffs, meaning they would need to prove they can overcome teams like Nashville and Winnipeg, among others, to squeak into the playoffs.

Vancouver does have the advantage of being a young team that might have a better shot of jumping out quickly like it did when the regular season started and the Canucks dominated the Pacific Division for the first couple months of the season. Players like Quinn Hughes would be playing as if he was a second-year player and should be able to provide even more stability in their back end to help the team gain their way into the playoffs. Goaltender Jacob Markstrom, who was on LTIR before the suspension of play, is already fully healed from his knee injury, and ready to go — another big plus. 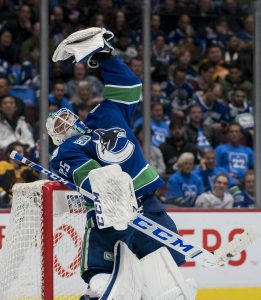 The team does have quite a bit offseason work to complete this season. The team has to lock up Markstrom to a long-term deal. The UFA could be one of the bigger names on the goalie market for teams, although he recently told Iain MacIntyre of Sportsnet, that he has no intention of playing for another team and wants to re-sign in Vancouver, which is good news for Canucks fans. The 30-year-old had his best season to date with a 2.75 GAA and a .918 save percentage.

However, the team has other issues, which could be challenging, considering the team is capped out. Barring a compliance buyout that could save them, the Canucks may have to make some significant moves to stay under a cap that likely won’t increase this offseason. The team also must consider contracts for veteran defenseman Chris Tanev as well as trade-deadline acquisition Tyler Toffoli, who looked exceptional in 10 games, scoring six goals and 10 points in a Vancouver uniform. That doesn’t even consider the team’s RFAs for next season, including Jake Virtanen, Adam Gaudette, Troy Stecher and Tyler Motte.

Hughes will have chance to walk away from the offseason with some hardware as it looks more and more like a two-person race for the Calder Trophy, for the best rookie. While many feel that Cale Makar was the runaway leader for the trophy, the play of Hughes in the second-half of the season has been exceptional and could be enough to vault himself past Makar in the running. Hughes did win our PHR poll in March by quite a landslide.