Though he hasn’t played in an NHL game since the 2017-18 season, Eddie Lack was still hoping to make it back at some point. Today, that chase has ended as the veteran goaltender announced his retirement. In his announcement video, he explained why he had to make that decision: 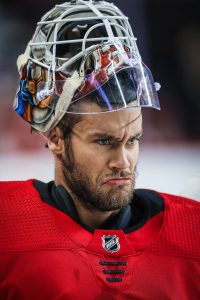 My hip issues have come to the point where I can live a normal life, but unfortunately it is not good enough to play professional hockey. I am content with the decision, as I know that I have done everything in my power to be able to come back but it just wasn’t meant to be. The last six years have been painfully frustrating for me. My mind wanted to play goalie a certain way, but my body wouldn’t allow me to play that way.

Lack, 32, broke in with the Vancouver Canucks in 2013 and was an immediate hit, posting a .912 save percentage in 41 starts to earn some Calder Trophy votes as one of the best rookies in the league. The following year he was even better while splitting time with Ryan Miller. Lack posted an 18-13-4 record with a .921 save percentage and was Vancouver’s starter heading into the playoffs.

Unfortunately, even that strong start to his career also was marred by injury and foreshadowed the eventual end. Lack first dealt with hip issues way back in 2013, getting a surgery that ended his minor league season prematurely. Those issues would only continue, leading Lack to play just 144 games over parts of five seasons in the league. During that time however he did win a gold medal with Sweden at the World Championships, playing behind Henrik Lundqvist. Lack will finish his playing career with a .909 save percentage.